Steve Lukather net worth: Steve Lukather is an award-winning American singer/songwriter who has a net worth of $90 million. Steve Lukather is probably most famous for being the guitarist and producer for the rock band Toto but it's possible that he owes the majority of his wealth to an incredibly successful side career producing for other artists, notably Michael Jackson. Outside of Toto, Lukather released seven progressive rock solo albums on his own.

Early Life: Steven Lee Lukather was born on October 21, 1957 in the San Fernando Valley, California. He began playing keyboards and drums then taught himself how to play guitar at age 7, inspired by the gift of an acoustic guitar and a Beatles album from his father. At Grant High School, Lukather met David Paich and brothers Jeff, Steve, and Mike Porcaro, all of whom eventually became members of Toto. Jeff Porcaro became a mentor to Lukather and furthered his interest in session work.

Toto: In 1976, the then 19-year-old rocker was asked to join a band called Toto by his friend David Paich. Lukather is the original lead guitarist for Toto as well as a lead and backing vocalist and composer.  Lukather would eventually go on to pen the majority of the band's string of hits, earning him several Grammy awards. Lukather credits Jeff Porcaro for his leadership within the band, however, Lukather's role in Toto evolved over time to the changing needs of the band.

In August 1992, Porcaro collapsed and unexpectedly died of heart failure while doing yard work at his home. The death profoundly affected the band and Lukather in particular, who felt he needed to step up and make sure the band kept going. With that, he took on a leadership role and assumed most of the vocal duties throughout the '90s until they found a new lead singer in 1997. Considered by this point as the heart of the band, Lukather performed lead vocals for every track on their 1992 album "Kingdom of Desire" and 1995's "Tambu." The single off the latter album, "I Will Remember", reached No. 64 on the UK charts.

Lukather's songwriting contributions grew from a small collection of tracks on early Toto records to co-writing every single track in the late '80s. He wrote very few Toto songs solo, except for the hit single "I Won't Hold You Back" from "Toto IV." Lukather contributed to writing all the songs on 2006's "Falling In Between." By 2008, Lukather was the only remaining original Toto member still performing with the band. In June of that year, Lukather decided to leave Toto, a decision that led directly to the official dissolution of the band. They reunited in February 2010 to support bassist Porcaro, who had been diagnosed with Lou Gehrig's disease. They continued to tour on a limited basis for two years.

Toto then released their first album in several years in March 2015, "Toto XIV." Sadly, Mike Porcaro died just five days prior to the release of the new album. They also announced a heavy international tour schedule. The band toured in celebration of its 40th anniversary from 2016-2019, when Lukather announced an indefinite hiatus. In October 2020, the band announced that Lukather and longtime vocalist Joseph Williams would embark on a tour as Toto in the 2021 "Dogz of Oz" tour, a live-streamed concert due to the COVID-19 pandemic, slated to air on November 21, 2020.

During its time, Toto released 14 studio albums and sold over 40 million records worldwide. The ground was honored with several Grammy Awards and, in 2009, was inducted into the Musicians Hall of Fame and Museum.

Session Work: In the '70s and '80s, Lukather was one of the most sought-out session guitarists in Southern California. Lukather worked with a range of established artists from Aretha Franklin to Warren Zevon. He was the solo guitarist on Olivia Newton-John's hit, "Physical" and the rhythm guitarist on Michael Jackson's "Beat It". Lukather was heavily involved in Jackson's monumental album Thriller. He's also written songs for heavyweights including Lionel Richie and Donna Summer. Lukather won a Grammy in 1982 for the George Benson song "Turn Your Love Around."

Solo Career: By the late '80s, Lukather had written a number of songs that were not selected to appear on Toto albums, so he decided to pursue a solo album. Lukather released his self-titled debut solo album in 1989, after Toto had been recording and playing for over a decade. He collaborated with many well-established musicians including Van Halen. His second solo album was "Candyman" five years later. His third album, "Luke" in 1997, was seen as an experimental album and was recorded mostly in live sessions with minimal overdubbing and processing afterwards. In October 2003, Lukather released the Christmas album "Santamental," teaming up again with Van Halen in a collaborative project that also featured many other several prominent musicians. The album was recorded in six days, after which Lukather proclaimed it to be his "first and last Christmas album."

In 2008, Lukather released "Ever Changing Times," a collection of songs he recorded in 2007 between Toto tours. As Toto had disbanded right around the time the album was released, Lukather embarked on his first solo tour to promote it. His sixth album "All's Well That Ends Well" was released in October 2010 in Europe and Japan, and in November as a digital worldwide release. The album draws on Lukather's personal experiences in the two years it had been since "Ever Changing Times" came out. Lukather wrote most of the lyrics himself but collaborated with various lyricists on some songs. His eighth solo studio album, "Transition", was released in January 2013.

Lukather is also into jazz fusion and has a long association with jazz musician Larry Carlton. The duo produced a Grammy-winning album. He's also a member of the jazz-fusion band Los Lobotomys. 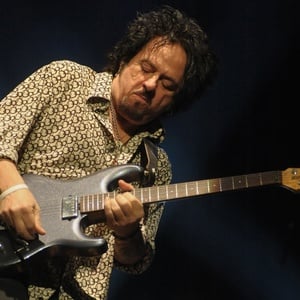