Steve Jones Net Worth: Steve Jones is an English rock guitarist, singer and actor who has a net worth of $12.5 million. Steve Jones was born September 3, 1955 in Hammersmith, London, England, U.K. He is best known as the guitarist and founding member of the punk rock band the Sex Pistols.

In the early '70s, Jones began learning to play guitar and co-founded a band, The Strand, with future Sex Pistols drummer Paul Cook. Around this same time he also frequented a popular London clothing shop, called Sex, was run by Malcolm McLaren and his partner, fashion designer Vivienne Westwood. The blossoming punk scene fascinated McLaren, who loved pushing cultural boundaries and was fresh from a somewhat disastrous run as the in-your-face manager of the New York Dolls, a pioneering glam-rock band. After the Dolls split up in the early '70s, McLaren returned to London, intent on creating a new band to manage. He found it in the form of Jones, Cook, bassist Glen Matlock and singer John Lydon, who came together in 1975 to form the Sex Pistols. Over the next three years, the Sex Pistols came to epitomize English punk. Early in his life, Steve Jones was involved in petty crimes and, unfortunately, he reverted back to his criminal ways during his time as an adult in the music industry. The story goes that Jones stole from a variety of rock stars and legends as the Pistols made their way to the top. It has also been said that he swiped microphones from David Bowie, a guitars from Rod Stewart and even a fur coat from The Rolling Stones' Ronnie Wood. Following the release of the Pistols' album, the band, which had replaced Matlock with Lydon's old friend Sid Vicious, headed to America for a series of concert dates.

But the tour quickly collapsed, as did the group. They played their final show at Winterland in San Francisco in 1978. Essentially, the Pistols were through, but Cook and Jones kept things going a bit longer with a series of additional singles that were used in McLaren's film account of the band, The Great Rock 'n' Roll Swindle (1980). After the demise of the Sex Pistols, Steve Jones went on to work as a studio musician, work in several other groups and host a radio program in Los Angeles called Jonesy's Jukebox. 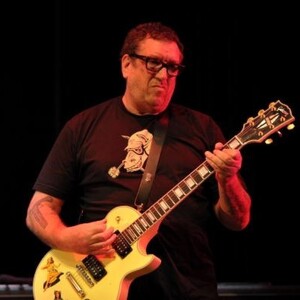