Steve Harris net worth: Steve Harris is an English musician and songwriter who has a net worth of $30 million dollars. Stephen Percy Harris was born in Leytonstone, Essex, England in March 1956. He is best known for being the bass player for the heavy metal band Iron Maiden. Harris is the only member of the band that has stayed with them since their inception. Harris is self-taught and purchased his first bass guitar for 40 pounds in 1971. His first band was known as Influence and changed to Gypsy's Kiss. After the band split he joined Smiler and started writing songs with future members of Iron Maiden. He created the band Iron Maiden in 1975 and they signed a contract with EMI in 1979. Harris is the band's principal lyricist and composer. The band has released 15 studio albums and has sold more than 85 million records worldwide. Since 1975 the band has played more than 2,000 live shows. They won a Grammy Award in 2011 and an Ivor Novello Award for International Achievement in 2002. In addition to bass, Harris also plays keyboards and provides backing vocals. His debut solo album British Lion was released in 2012. His daughter Lauren is a singer and his son George plays guitar. His daughter Kerry is a production assistant for his band. Harris has also produced and co-produced some of the band's albums, as well as directing and editing their live videos. 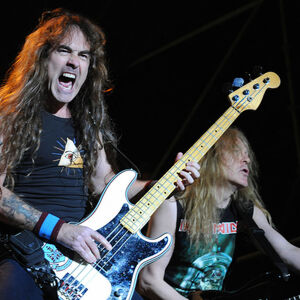