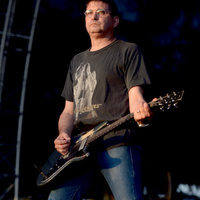 Steve Albini Net Worth: Steve Albini is an American musician, producer, and journalist who has a net worth of $10 million. Steve Albini was born in Pasadena, California, in 1962 and grew up as a teenager in Montana. He took up the bass guitar while he was in high school and soon after developed a passion for punk rock. Albini graduated from the Medill School of Journalism at Northwestern University in the Chicago suburbs, where he became involved with several local bands. In 1982, Albini founded Big Black while he was still in college and worked on the band's first EP called "Lungs". Four years later, the group released its first studio album "Atomizer". They have released several albums since then. In 1987, Albini formed the group "Rapeman" for which he attracted several negative headlines. The group broke up shortly after its formation after a handful of releases. By 1992, Albini was working with the band Shellac, whose releases include "The Rude Gesture: A Pictorial History", "Uranus", "The Bird Is The Most Popular Finger", "At Action Park", and "Excellent Italian Greyhound". In addition to his music career, Albini works as a record producer and had a hand in Nirvana's last studio release "In Utero". Albini owns his own recording studio, publishes his own food blog, and has taken part in the World Series of Poker. He is married to film director Heather Whinna, and lives in Chicago.