How much is Slipknot Worth?

Slipknot Net Worth: Slipknot is an American metal band who has a net worth of $20 million dollars. Slipknot is comprised of Shawn Crahan, Craig Jones, Mick Thomson, Corey Taylor, Sid Wilson, Chris Fehn and Jim Root. Past members include Joey Jordison, Paul Gray, Josh Brainard, Brandon Darner, Greg Welts, Anders Colsefni and Donnie Steele. Slipknot is known for its attention-grabbing image, aggressive music style and energetic and chaotic live shows. Formed in 1995 in the unlikely backdrop of Des Moines, Iowa, Slipknot experienced some early personnel shifts before they finally settled around a nine-piece line-up, which they ordered 0-8. Paul Gray (#2) died in May of 2010 and Joey Jordison (#1) left the group in December of 2013, leaving seven remaining members. Early in their formation, the music scene in Des Moines was fairly non-existent in terms of notable acts and Slipknot's big-time audition was usually met with disbelief and ridicule, which spawned the initial spark of its mostly anonymous stage visuals. Without a recording budget, the band had to self-finance their first project, the cost of which came to about $40,000 and distribution was pretty much left up to the band and their producer Sean McMahon. The band went on their first tour in 1999 when they were a part of Ozzfest, a tour which served to expand their fan base and Slipknot released a self-titled album in June of 1999. 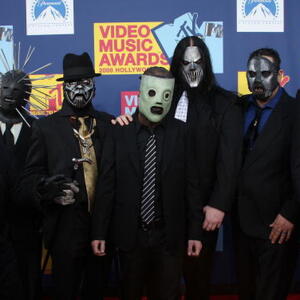