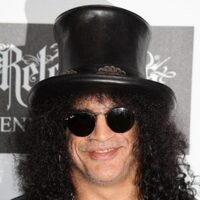 What is Slash's net worth?

Slash is a British-American musician and songwriter who has a net worth of $90 million. Slash is best known for being the lead guitarist of the band Guns N' Roses. Slash also co-founded Velvet Revolver with former bandmates and other rock stars. When Guns N' Roses tours, Slash has the ability to earn tens of millions of dollars in a single year. For example, both Slash and Axl Rose earned $40 million off their 2017 "Not in our Lifetimes" tour.

Slash was born Saul Hudson in Hampstead, London on July 23, 1965. He was exposed to music at an early age. His mother, Ola J. Hudson, designed costumes for David Bowie, Ringo Starr, and Janis Joplin. His father Anthony Hudson is an artist who created album covers for musicians such as Neil Young and Joni Mitchell. He moved from England to Los Angeles at an early age for his parents' careers, and took music lessons as a child. Following his parents' separation in 1974 (Slash detailed to NME in 2012 that he once caught his mother and David Bowie naked together), Slash became a self-described "problem child." He chose to live with his mother but was often sent to live with his grandmother when his mother had to travel. His nickname, Slash, was given to him by actor Seymour Cassel when he visited his mother on a set. Slash attended Beverly Hills High School, where he was a classmate of Lenny Kravitz.


Slash joined his first band in 1981, Tidus Sloan. In 1983 he formed a Motorhead tribute band, which broke up in 1984. Slash soon joined another band called Black Sheep, which played with a popular band Hollywood Rose.

In 1984, Slash met Axl Rose and the two quickly became friends. A few months later Slash and Axl Rose teamed up with Duff McKagan and Izzy Stradlin to form the band Guns N' Roses, with Slash acting as their lead guitarist.

Between 1985 and 86 the band had several hits, and their album "Appetite for Destruction" sold over 28 million copies. The album was the best-selling debut album of all time in the United States. It was during this period that the band wrote most of their famous hits, including "Welcome to the Jungle" and "Paradise City."  In 1988, Guns N' Roses had their first #1 hit, "Sweet Child of Mine." As a result of their rebellious and rowdy nature, the band received the moniker "The Most Dangerous Band in the World". In 1988, the band released "G'N'R Lies", which sold over five million copies in the U.S.

As G&R's success grew, so did personal tensions between band members. Axl Rose threatened to leave the band during a show where they were the opening act for the Rolling Stones in 1989, citing the rampant heroin use amongst band members. Slash promised to clean up. In May 1991, the band embarked on a two and a half year Use Your Illusion Tour, during this time they released the two long-awaited albums of the same name, which both debuted at #1 on the Billboard charts. Slash played his last live show with G&R in July 1993.

After leaving the band in 1996, Slash began focusing on his solo career, as well as studio work for many successful artists, including Michael Jackson and Quentin Tarantino's soundtrack to Jackie Brown. In 2004 after reuniting with Stradlin, McKagan, and Matt Sorum, the super-group Velvet Revolver released their first album "Contraband." Slash finally released his first solo album of the same name in 2010. Slash has continued to collaborate, contribute, and play with other artists in the studio and on tracks. He is widely regarded as one of the best guitar players of all time and has been lauded by critics, fans, and fellow musicians over the course of his career. In 2016, Guns N' Roses reunited during the band's secret gig at the Troubadour in Los Angeles. G&R then embarked on an ambitious three-and-a-half-year world reunion tour, spanning from April 2016-November 2019.

Outside of his successful music career, Slash is a film buff and has had small parts in numerous films and TV series. He has also appeared as himself in many projects, including "Private Parts" in 1997, "The Drew Carey Show", "MADtv", and Sacha Baron Cohen's 2009 "Bruno." Slash formed his own horror film production company in 2010, Slasher Films. Its first film, "Nothing Left to Fear" was released in October 2013. Slash's autobiography, titled after him, was published in October 2007. Slash is also a pinball enthusiast and collector and a keen artist, designing the logos and artwork for several of his bands before Guns N' Roses fame came knocking. It comes as no surprise that he also collects guitars–he owns over 100, and his collection is reported to be worth $1.92 million. 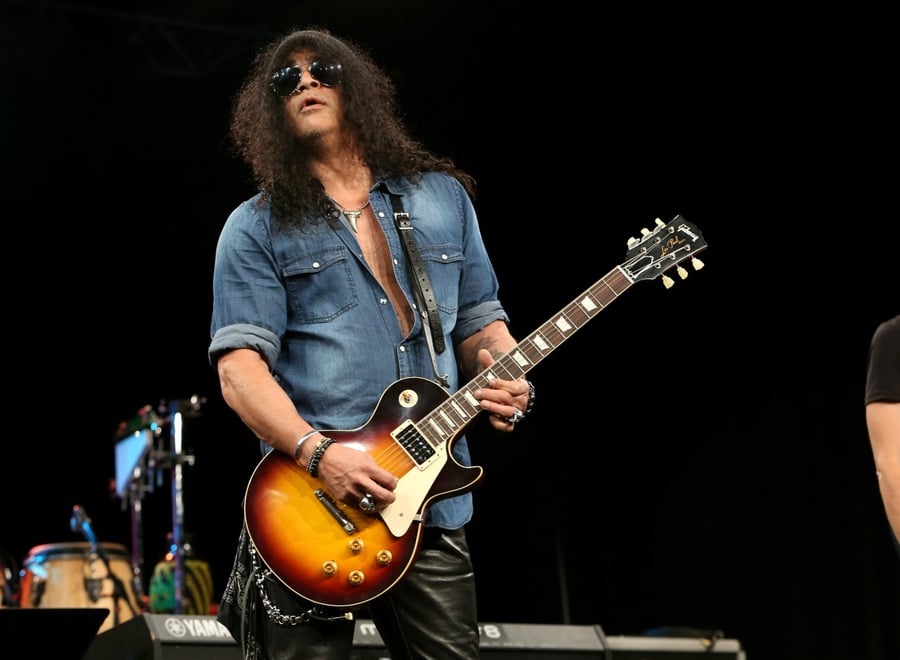 Slash is a dual citizen of the UK and the U.S. He has lived in Los Angeles from 1971, but didn't gain citizenship until 1996. He considers himself British and has stated he's always felt more comfortable in England.

He was diagnosed in 2001 at age 35 with cardiomyopathy, a form of heart failure caused by years of alcohol and drug abuse. He has been sober since 2005. Slash's mother died in 2009 from lung cancer and he subsequently quit smoking.

For many years, Slash has contributed to environmental welfare programs. He serves on the board of trustees of the Greater Los Angeles Zoo Association. He's also an honorary board member of Little Kids Rock, a national nonprofit that works to restore music education programs in public schools.

Slash and Axl Rose earned $40 million a piece thanks to their "Not in this Lifetime" comeback tour. That number was confirmed by a court filing made by Slash's ex-wife Perla as part of their divorce battle. On August 31, 2018, Perla's lawyer filed a document which claimed that Slash's 2017 income was $45 million, a large portion of which came from the "Not in this Lifetime" tour.

In 2009 Slash spent $7.3 million on a house in the gated exclusive neighborhood called Mulholland Estates in the hills of Sherman Oaks. He listed the home for $10.5 million in early 2016. He sold the home in December 2017 to rapper Big Sean for $8.7 million.