Sid Wilson net worth: Sid Wilson is an American DJ and musician who has a net worth of $10 million dollars. Sid Wilson was born in Des Moines, Iowa in January 1977. He is best known for being the turntablist of the band Slipknot. He also uses the name DJ Starscream when he tours without the band.

He is known for wearing a mask based on gas masks when performing with the band. As DJ Starscream he has released the albums Full Metal Scratch-It in 2003, Abunaii Sounds – Tataku On Your Atarna in 2003, Sound Assault in 2005, Live at Konkrete Jungle New York City in 2005, The New Leader in 2006, and This Is Full Metal Jungle Vol. 1 in 2008. Wilson has also released the albums SID in 2011 and Repeat (with thekeenone) in 2011 as SID. He has performed on turntables for Slipknot since 1998 and started playing keyboards for the group in 2008. 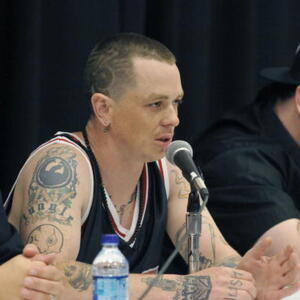