Sid Vicious Net Worth: Sid Vicious was an English musician and vocalist who had a net worth of $400 thousand. Sid Vicious was born in Lewisham, London, England in May 1957 and passed away in February 1979. He was best known for being the bass guitar player for the Sex Pistols.

The band's only studio album Never Mind the Bollocks, Here's the Sex Pistols was released in 1977 and hit #1 on the UK charts. Their most popular songs include "God Save the Queen", "Anarchy in the U.K. and "C'mon Everybody". The band was inducted into the Rock and Roll Hall of Fame in 2006 but refused to attend the ceremony. During the recording of their album Sid was hospitalized with hepatitis and his bass only ended being partially featured on one song on the album. He appeared as the lead vocalist for the soundtrack of The Great Rock 'n' Roll Swindle. Sid's girlfriend was his manager Nancy Spungen. Nancy was stabbed while staying in a hotel with Vicious and he was under suspicion of committing her murder. Sid was later arrested for assaulting a man at a nightclub and took part in drug rehabilitation on Rikers Island. Sid's mother supplied drugs to him since he was young and helped him get heroin the night that he passed away in his sleep on February 2, 1979 at 21 years old. Vicious was also a part of the bands Siouxsie and the Banshees, Vicious White Kids, and The Flowers of Romance. 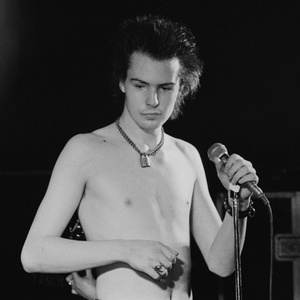