How much is Shirley Manson Worth?

Shirley Manson net worth: Shirley Manson is a Scottish singer, songwriter, actress, and musician who has a net worth of $16 million. Shirley Manson was born in Edinburgh, Scotland in August 1966. Manson is best known for being the lead singer of the band Garbage. She started as a teenager singing background vocals and playing keyboards for the band Goodbye Mr. Mackenzie. She was approached by her record label to become a solo artist and recorded an album using the name Angelfish. She was then invited by the band Garbage to audition and co-wrote and co-produced an album for the band. Garbage formed in Madison, Wisconsin in 1993 and all four band members are involved with production and songwriting. They have sold more than 17 million records starting with their self-titled debut studio album in 1995 which sold more than four million copies and certified 2x Platinum in the US, UK, and Australia. Their second album Version 2.0 was released in 1998 and reached #1 in the UK, France, and New Zealand. Garage has released a total of five studio albums and has had hits with songs like "Stupid Girl" and "Only Happy When It Rains". Garbage has been nominated for seven Grammy Awards. As an actress Manson starred as Catherine Weaver in the television series Terminator: The Sarah Connor Chronicles from 2008 to 2009 and as Nicole in the movie Knife Fight in 2012. 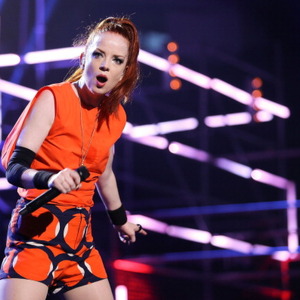