Shawn Drover Net Worth: Shawn Drover is a Canadian drummer who has a net worth of $10 million. Shawn Drover was born in Montreal, Quebec, Canada in May 1966. Drover is best known for being the drummer of the heavy metal band Megadeth. Shawn started playing drums at just 13 years old and was part of the power metal band Eidolon with his brother Glen.

Megadeth formed in 1983. They are considered one of the pioneers of the American thrash metal scene and are one of the "big four". The band has released 14 studio albums including six that have been certified Platinum. They have sold over 50 million records worldwide and been nominated for 14 Grammy Awards. Drover announced he was leaving the band in November 2014. He also released seven albums with Eidolon. Drover endorses Evans drumheads, Yamaha Drums, Toca percussion, Pro-Mark Drumsticks, and Extreme Isolation headphones. 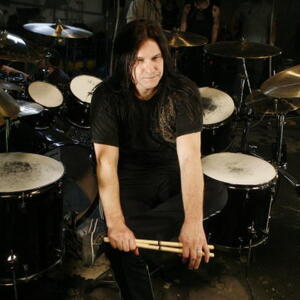