Shane MacGowan Net Worth: Shane MacGown is an English-born singer and songwriter who has a net worth of $25 million dollars. Born in Pembury, Kent, England, in 1957 Shane MacGown grew up in Ireland during his early childhood before moving back to England. He was enrolled at the prestigious Westminster School but was expelled after being caught with drugs.

He formed his first punk rock band, The Nipple Erectors, during the '70s. A few years later, he founded The Pogues and began writing songs inspired by his Irish experiences. His best-known song with the group is the mid-80s hit "Fairytale of New York". In the early '90s, he was tossed from the band and created Shane MacGown and The Popes, who have released two studio albums in addition to a live DVD and live album. The group toured throughout Europe during the mid-2000s. He returned to The Pogues in 2001 to headline a tour, and again each year between 2004 and 2009. His return to The Pogues was made official in 2005, and the group re-released "Fairytale of New York", with the single climbing to number two in the U.K. Five years later, he joined The Shane Gang and tours frequently with them when not busy with The Pogues. MacGown has been featured on songs for nearly a dozen different acts, including Dropick Murphys and The Priests. He's battled drug addiction for much of his life, and made headlines when Sinead O'Connor reported him to the London police for heroin possession. MacGown has credited O'Connor with helping him get clean. 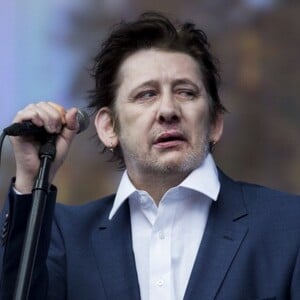