Scotty Moore Net Worth: Scotty Moore is an American musician and recording engineer who has a net worth of $10 million. Born Winfield Scott Moore III in Gadsden, Tennessee, in 1931, Scotty Moore started playing the guitar when he was eight years old. He later joined the U.S. Navy in 1948, though he wasn't old enough to enlist.

He served until 1952 and, after his discharge from the military, he was connected with budding musician Elvis Presley. In 1954, Moore played guitar for Elvis' "That's All Right (Mama)", and became part of the Blue Moon Boys with Elvis and Bill Black. As the Blue Moon Boys toured the south, Moore became Presley's manager. He played on dozens of Elvis' best-known tracks, including "Heartbreak Hotel", "Rock-A-Hula Baby", "Kiss Me Quick", "Jailhouse Rock", "Hard Headed Woman", "Mystery Train", "Hound Dog", "Good Rockin' Tonight", and "Blue Suede Shoes". The Blue Moon Boys are also in several films starring Elvis: "Loving You", "Jailhouse Rock", "King Creole", and "G.I. Blues". Moore released his debut solo album in 1964: "The Guitar That Changed the World". Four years later, he reunited with Elvis for the "'68 Comeback Special" on NBC. He later worked on "That's Alright, Elvis: The Untold Story of Elvis' First Guitarist and Manager", a book he wrote as told to James Dickerson. Moore's journey with Elvis is captured on several TV shows and documentaries, including "This is Elvis" and "Elvis: The Early Years". Moore was inducted into the Rock and Roll Hall of Fame in 2000 and is considered one of the greatest guitarists of all time. 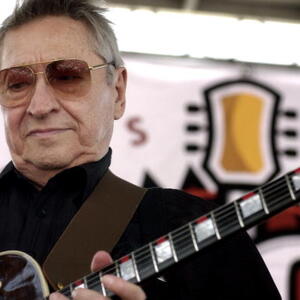