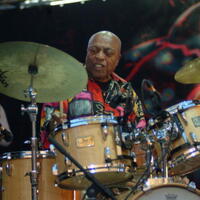 Roy Haynes net worth: Roy Haynes is an American jazz drummer who has a net worth of $5 million. He is known for being one of the most recorded drummers in jazz with a 70 year career.

Roy Haynes was born in Boston, Massachusetts in March 1925. His styles of music include jazz fusion, avant-garde jazz, bebop, and jazz fusion. Haynes is considered to be the father of modern jazz drumming and earned the nickname "Snap Crackle". He has led bands including the Hip Ensemble. Roy Haynes was inducted into the Modern Drummer Hall of Fame in 1999. He inspired a family of musicians including cornetist Graham Hayes and drummer Marcus Gilmore. He first released the album Busman's Holiday in 1954 after starting recording work as a sideman in the 1940s. He has been nominated for Grammy Awards for his albums Fountain of Youth and Whereas. Haynes has been associated with artists including Charlie Parker, Lester Young, Bud Powell, and more.