Ronnie Van Zant Net Worth: Ronnie Van Zant was an American singer and songwriter who had a net worth of $2 million at the time of his death in 1977, after adjusting for inflation. He is best known for being a founding member of the rock band Lynyrd Skynyrd.

Ronnie Van Zant was born in Jacksonville, Florida in January 1948 and passed away in October 1977. Ronnie was the older brother of Lynyrd Skynyrd lead vocalist Johnny Van Zant. The band formed in 1964 and was named after the members' high school gym teacher Leonard Skinner. Their signature songs include "Sweet Home Alabama" and "Free Bird". They released their debut studio album (Pronounced Leh-nerd Skin-nerd) in 1973. The band's first two albums were certified 2x Platinum. Other Skynyrd hits included "I Ain't the One", "Tuesday's Gone", "Gimme Three Steps", and "Simple Man". Ronnie was married twice and had two daughters. Ronnie Van Zant passed away on October 20, 1977 at the age of 29. Lynyrd Skynyrd was flying from South Carolina to Louisiana on a Convair CV-300 that crashed in Mississippi. The aircraft struck a tree and Van Zant died of head injuries upon impact. Skynyrd bandmates Steve and Cassie Gaines were also killed, along with their assistant road manager, pilot, co-pilot. Lynyrd Skynyrd was inducted into the Rock and Roll Hall of Fame in 2006. 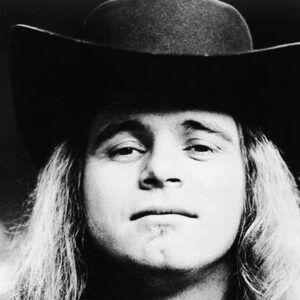