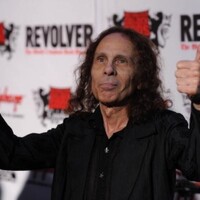 Ronnie James Dio: Ronnie James Dio is an American vocalist and writer who has a net worth of $10 million dollars. Born in Portsmouth, New Hampshire, Ronnie James Dio moved to New York when he was child, and began playing the French horn and the trumpet while he was in elementary school. By the time he reached high school, he had already recorded singles with multiple bands. In high school, he played bass guitar in a band called The Vegas Kings. The group was later renamed Ronnie & the Redcaps, after he took over as lead singer. After recording a few singles, the group members changed and the band was renamed Ronnie and the Prophets. The band stuck together until 1967, releasing one album and multiple singles. Ronnie and former bandmate, Nick Pantas, then formed a moderately successful duo called, Elf. He went on to perform with the band, Rainbow, and found the most lasting success as the frontman for Black Sabbath, and later with his own band, Dio. He passed away due to stomach cancer in May of 2010.