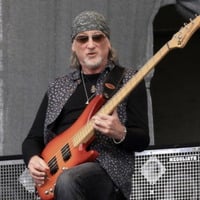 Roger Glover net worth: Roger Glover is a British musician, songwriter, and record producer who has a net worth of $35 million. Roger Glover was born in Brecon, Powys, Wales, United Kingdom in November 1945. He is best known for being the bassist in the hard rock bands Deep Purple and Rainbow. Deep Purple formed in 1968 and released their debut studio album Shades of Deep Purple in 1968. They have released 20 studio albums with many reaching #1 in at least one country including Deep Purple in Rock, Fireball, Machine Head, Who Do We Think We Are, Burn, Stormbringer, Perfect Strangers, The House of Blue Light, Now What?!, and Infinite. Their most popular singles include "Black Night" and "Smoke on the Water". Glover played bass for Rainbow from 1979 to 1984 and played on the albums Down to Earth, Difficult to Cure, Straight Between the Eyes, and Bent Out of Shape. Roger Glover has also released several studio albums and played on albums by many other artists in addition to producing many more.