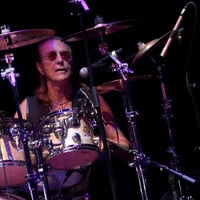 Roger Earl net worth: Roger Earl is an English drummer who has a net worth of $10 million. Roger Earl was born in Hampton Court Palace, London, England in May 1946. He is best known for being a member of the rock band Foghat. He is the only member of Foghat that has performed during all of the band's various incarnations. The band formed in 1971 and released their self-titled debut studio album in 1972 which was certified Gold. They released the album Rock and Roll in 1973. Foghat released the album Energized in 1974 which reached #34 on the US Album chart and they released the album Rock and Roll Outlaws the same year. Their album Fool for the City was released in 1975 and reached #23 in the US and was certified Platinum. Foghat released the album Night Shift in 1976 and their album Foghat Live was released in 1977 and reached #11 on the US Album chart and was 2x Platinum. They also released the albums Stone Blue in 1978, Boogie Motel in 1979, Tight Shoes in 1980, Girls to Chat & Boys to Bounce in 1981, In the Mood for Something Rude in 1982, Zig-Zag Walk in 1983, Return of the Boogie Men in 1994, Family Joules in 2003, Decades Live in 2003, Foghat Live II in 2007, Last Train Home in 2010, Under the Influence in 2016, Live at the Belly UP in 2017, and Slow Ride in 2018.