How much is Robin Zander Worth?

Robin Zander Net Worth: Robin Zander is an American musician who is the lead singer and guitarist for the rock band Cheap Trick who has a net worth of $25 million dollars. Robin Zander was born on January 23, 1953 in Beloit, Wisconsin where he was reading books by age three and learned to play the guitar by age 12. He played with his first group, The Destinations, while in seventh grade. In high school, Zander sang for three years in the Madrigals, the most demanding of the three choral groups at his school, played basketball and football, and had a part-time job at a sandwich shop. In 1972, Zander was offered the lead singer role in a new band called Cheap Trick by the group's drummer, Bun E. Carlos. At the time, Zander was under contract with a resort in Wisconsin Dells, where he sang and played cover songs. Zander's resort contract expired, and he joined Cheap Trick as lead singer. Zander continues to perform with Cheap Trick around the world. In 2008, the group played in Japan for the 30th anniversary of their original Budokan album release. Zander currently resides in Safety Harbor, Florida with his wife, former Playboy Playmate Pamela Stein and two children: a son, Robin Zander Jr., and a daughter, Robin-Sailor Zander. 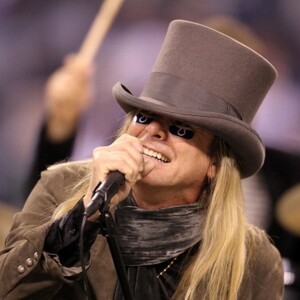