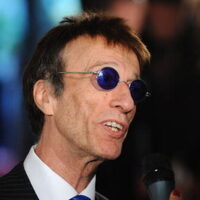 What was Robin Gibb's Net Worth?

Robin Gibb was a pop singer, most famous for his involvement in The Bee Gees, who had a net worth of $80 million at the time of his death in 2012. Along with his older brother Barry Gibb and his fraternal twin Maurice Gibb, Robin formed one of the most famed and successful musical groups in the 60s and 70s. Outside of his work with the Bee Gees, Robin enjoyed a successful solo career.

The Bee Gees are one of the most successful pop groups of all time, with record sales exceeding 200 million. Robin has been singled out for praise by music critics, and his soulful voice was unique and powerful. He has also been called one of the most important musicians in British history. Gibb was capable of playing a wide range of different instruments, including the keyboards, piano, organ, and Mellotron. In 2012, Robin Gibb passed away at the age of 62 from cancer.

Robert Hugh Gibb was born on December 22nd of 1949 in Douglas, Isle of Man. Robin was raised in Manchester alongside his fraternal twin Maurice, his two brothers Andy and Barry, and a sister named Lesley. The Gibbs formed a band in Manchester while they were still quite young. Robin then relocated with his family once more to Redcliffe, Australia. It was during this time that the Gibbs brothers started their first group together, with Barry, Maurice, and Robin all forming a trio. However, they only began to experience genuine success when the three boys moved back to Manchester.

In 1955, the Gibbs brothers formed a group called the Rattlesnakes. Barry performed vocals and played the guitar, while Robin and Maurice also performed vocals. In addition, a man named Paul Frost played the drums while another musician named Kenny Horrocks played the tea-chest bass. Initially, the group performed at small, local venues throughout Manchester.

After moving to Australia, the three aforementioned Gibbs brothers came together as a trio. While living in Queensland, the group named themselves the Bee Gees for the first time. Not long afterward, the group began to appear on television for the first time and signed a record deal with Festival Records. Their debut single "The Battle of the Blue and the Grey" shortly preceded "Claustrophobia," which featured Robin playing melodica for the first time. By 1965, he had started to perform as the lead vocalist on occasion with songs like "I Don't Think It's Funny." After this release, he also started writing songs for the first time, including "I Don't Know Why I Bother With Myself."

By the late 60s, the Bee Gees had become quite successful with the single "New York Mining Disaster 1941." At this point, drummer Colin Petersen and guitarist Vince Melouney joined the Bee Gees. After touring Europe and the US on the heels of this success, they released a chart-topping single in the UK entitled "Massachusetts."

After a health scare following a nervous collapse from exhaustion, Gibb continued to write songs for the Bee Gees and other groups like The Marbles. By the late 60s, Robin had developed a fierce rivalry with his brother Barry. After the release of "Odessa," Robin left the group to embark on a solo career. He was only 19 years old. He achieved immediate success with singles like "Saved by the Bell" and later released a solo album entitled "Robin's Reign."

In the 70s, the Bee Gees came back together and released a number of smash hits over the next decade. These included singles such as "How Deep Is Your Love," "More Than A Woman," "Stayin' Alive," and "You Should Be Dancing." During the 80s, Robin collaborated with a range of artists, such as Gary Numan, the Ramones, The Cure, and The Cars. He then released a second solo album entitled "How Old Are You?" A number of additional solo albums followed. The Bee Gees also continued to release music, and they also toured well into the 2000s.

Robin's first wife was Molly Hullis, a secretary whom he married in 1968. Shortly after their marriage, the pair survived the infamous Hither Green rail crash. After having two children together, Hullis and Gibb divorced in 1980. Three years later, Robin was sentenced to two weeks in jail after he spoke about this marriage publicly, as this was in violation of a previous court order.

In 1985, Gibb married Dwina Murphy. He stayed with this artist and author until his death in 2012. Over the course of their relationship, Murphy and Gibb had one son together. At the age of 50, Robin started an illicit relationship with his 25-year-old housekeeper, Claire Yang. This affair continued for years, and in 2008 Yang gave birth to Gibb's fourth child.

In 2010, Robin started experiencing serious health concerns. What started as abdominal pains steadily became worse, until he was forced to undergo emergency surgery at a hospital. Although Gibb recovered, he never truly returned to the prime of his health. Throughout 2011, he was forced to cancel a number of tours.

Finally, in late November, he was diagnosed with colorectal cancer. Things became steadily worse as he contracted pneumonia and fell into a coma for a long period in April. Although he came out of his coma later that month, his cancer had advanced considerably during this period. On May 20th of 2012, Robin passed away from liver and kidney failure in London.

Upon his death, Robin left the vast majority of his estate to his widow Dwina. His widow's portion of the estate had a net value of at least $30 million, and it included various properties and assets. He also set aside millions in trusts for his children and left $6 million to his mistress Claire Yang, with whom he had a child.

Like his brothers, Robin owned several homes around the world. His property portfolio was especially impressive in Miami. In 2008, he sold a 20,000 square-foot Miami home he had owned for several decades for $16 million. Soon after that sale, Robin and his wife Dwina paid $4.3 million for a new Miami mansion. A year before dying, Robin listed the home for $4.25 million. Two years later Dwina, then a widow, accepted $30 million for the property. Outside of Miami Robin owned a mansion on the Isle of Manand a large estate in Thame, Oxfordshire, England.