What is Robert Trujillo's Net Worth?

Robert Trujillo is a musician and songwriter who has a net worth of $40 million. Robert Trujillo earned fortune and fame as the bassist of the heavy metal band Metallica. Robert officially became a full-time member of Metallica in 2003 after the departure of longtime bassist Jason Newsted. Prior to Metallica, he was a member of the hardcore punk band Suicidal Tendencies, and joined the funk metal supergroup Infectious Grooves. Trujillo has also performed with Ozzy Osbourne and the heavy metal band Black Label Society.

Trujillo has also had small roles in television and film, including a non-speaking role in the 1978 Walter Matthau film House Calls and a minor role in the 1980 Gary Coleman made-for-TV film Scout's Honor. He also played a character named "Flippy" in a 1982 episode of the television drama series CHiPs. In 1992, he appeared as himself, along with his Infectious Grooves' band mates, in the hit Brendan Fraser comedy film Encino Man.

Robert Trujillo was born on October 23, 1964 in Santa Monica, California, and was raised in Culver City. He is of Native American and Mexican ancestry. Trujillo became interested in music early on in life, and went on to perform in numerous party bands. At the age of 19, he attended jazz school with the aim of becoming a studio musician, but ultimately decided to nurture his love of rock and metal instead.

In 1989, Trujillo gained widespread recognition when he replaced Bob Heathcote as the bassist of the California hardcore punk band Suicidal Tendencies. He was subsequently on the group's album "Controlled by Hatred/Feel Like Shit…Déjà Vu," on which he was credited under the name Stymee. Trujillo remained with Suicidal Tendencies through 1995, appearing on the albums "Lights…Camera…Revolution!," "The Art of Rebellion," "Still Cyco After All These Years," and "Suicidal for Life."

In February of 2003, two years after the departure of bassist Jason Newsted, Trujillo joined the heavy metal band Metallica. Jason was Metallica's second bassist. He replaced original bassist Cliff Burton after Burton's tragic sudden death in a 1986 tour bus accident. He received $1 million as an advance for joining. Trujillo's first album with the band was 2008's "Death Magnetic," which peaked at number one on the Billboard 200. It went on to receive six Grammy Award nominations, winning three including Best Metal Performance for the song "My Apocalypse."

From 2008 to 2010, Metallica embarked on the World Magnetic Tour to promote the album. Trujillo's next record with the band was "Hardwired… to Self-Destruct," which was released after an eight-year gap in 2016. It became Metallica's sixth consecutive studio album to debut atop the Billboard 200, and received a Grammy Award nomination for Best Rock Album. In 2009, along with the other members of Metallica, James Hetfield, Lars Ulrich, Kirk Hammett AND former member Jason Newsted, Trujillo was inducted into the Rock and Roll Hall of Fame. 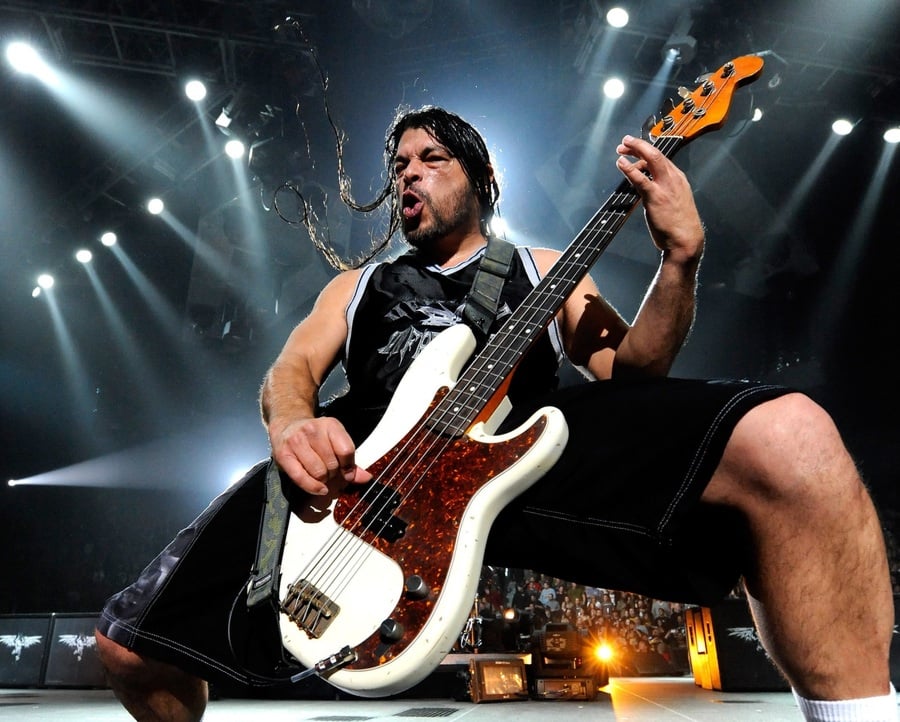 Beginning in the late 90s, Trujillo was a member of Ozzy Osbourne's band. He wrote a number of songs on Osbourne's 2001 album "Down to Earth," and re-recorded bass tracks for reissued versions of the albums "Blizzard of Ozz" and "Diary of a Madman." Trujillo also formed the experimental supergroup Mass Mental with singer Benji Webbe; after releasing one studio album in Japan and one live album of a Tokyo performance, the group disbanded. Following this, Trujillo briefly performed with the heavy metal band Black Label Society, led by Zakk Wylde. He contributed bass to two songs on the group's 2002 album "1919 Eternal." Also in 2002, Trujillo served as the bassist on Jerry Cantrell's solo album "Degradation Trip."

Beyond his music career, Trujillo was a writer and producer on the 2014 documentary "Jaco." Directed by Paul Marchand and Stephen Kijak, it chronicles the life and death of jazz bassist Jaco Pastorius.

Trujillo is mostly a finger-style player, although he sometimes plays with a pick. He is also known for playing chord-based harmonics on the bass, and for using the slap bass technique to produce percussive sounds through his instrument. While recording, Trujillo uses his own code for writing down bass arrangements, a process he honed during the recording sessions for "Degradation Trip."

With Metallica, Trujillo primarily plays 5- and 4-string Warwick Streamer bass guitars. He has also played Fernandes Gravity 5-string basses. Before joining Metallica, Trujillo played 5-string Tobias, MusicMan, and ESP basses. In concert, he has been seen with such instruments as a Yamaha TRB5-P2 5-string bass, a customized Rickenbacker 4001/4003 4-string bass, and both a Fender Precision Bass and a Fender Jazz Bass. In 2010, Trujillo collaborated with Dunlop Manufacturing to create new signature bass strings that use taper-core stainless steel.

With his wife Chloé, Trujillo has a son named Tye and a daughter named Lullah. Like his father, Tye is a bassist; he performed with the nu metal band Korn in 2017, and is a member of the band Suspect208.

In December 2007, Robert paid $1.8 million for a home in Topanga, California.