Robbin Crosby net worth: Robbin Crosby was an American guitarist who had a net worth of $300 thousand at the time of his death. Robbin Crosby was born in La Jolla, California in August 1959 and passed away in June 2002. He was best known for being a member of the metal band Ratt.

The band formed in 1976 and Crosby was a member from 1981 to 1992. The band released their debut studio album Out of the Cellar in 1984 which reached #7 in the US where it was certified 3x platinum and #12 in Canada. Ratt's album Invasion of Your Privacy was released in 1985 and also reached #7 in the US where it was 2x platinum. Ratt released the albums Dancing Undercover in 1986, Reach For the Sky in 1988, and Detonator in 1990. Their singles "Round and Round" and "Lay It Down" were both certified Gold in the US. Crosby played on the Jon Bon Jovi album Blaze of Glory. Robbin Crosby died on June 6, 2002 at 42 years old from a heroin overdose and pneumonia with complications from AIDS. 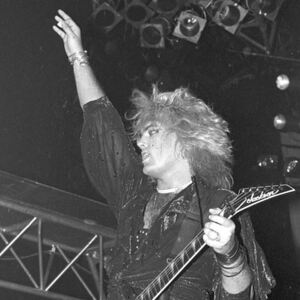