Rick Nielsen Net Worth: Rick Nielsen is an American musician and songwriter who has a net worth of $22 million dollars. Born December 22, 1946 in Rockford, Illinois, Rick Nielsen is widely known as the lead guitarist, background vocalist and primary songwriter of the rock band Cheap Trick. He is also noted for designing his own guitars and for the use of multi-neck guitars.

Before his stint with Cheap Trick he was associated with a number of other bands such as Fuse and Grim Reapers. After relocating to Philadelphia, Nielsen was one of the founding members of Cheap Trick, along with Tom Petersson, also from Rockford, Illinois. Nielsen often sported a 'checkerboard' pattern on his clothing and even on a pair of Van sneakers. Each performance during his days with Cheap Trick was stamped by the uniqueness of the latest guitar design he was playing during the concert-more often than not playing a different guitar for each and every song during the concert. Cheap Trick plays Dream Police at almost every concert, during which Nielsen sings his solo and tosses hundreds of guitar picks to the crowd. Neilsen is very passionate about guitars and now owns more than 400 of them. 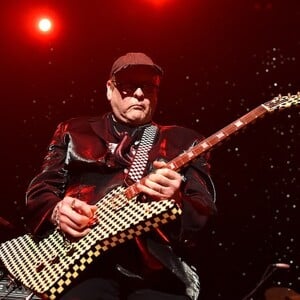