Rock guitarist Rick Dufay has an estimated net worth of $5 million. Born in Paris, Dufay played for Aerosmith in the 80's, which contributed greatly to his net worth.
Dufay must have thought all his Christmases came at once: he had the chance to join what can be described as (arguably) the most notable rock band, Aerosmith. This once in a lifetime opportunity came after the resident guitarist, Brad Whitford left the band in 1980. Dufay was highly recommended by the band's producer, Jack Douglas. A solo artist before Aerosmith, Dufay released an album, Tender Loving Abuse (1980), which was produced was Douglas.

Dufay was the 'stabilising force' behind the band – and lean a shoulder to lean on for the band members. He was involved in producing the band's 1982 album, Rock in a Hard Place and also appeared in the music video, Lightning Strikes. During VH1's Behind the Music, Dufay confessed that he helped Steven Tyler with his battle against addition and depression. Furthermore, Dufay helped Tyler reunite Whitford and Joe Perry. However Dufay's dream came to an end when Whitford made his return in 1984. Since Aerosmith, Dufay was signed to European Label and recorded an album which was set for release in 1989. However the album didn't see the light of day, as the label collapsed before the release of the album. Thanks to advancement of technology, fans of the French rocker can download the album, Written in the Stone, from his website. Dufay has been involved in several musical projects, including his starting his own band, The Rick Dufay Band and Blue by nature, teaming up Karen Lawrence back in the nineties. After four years with the blues band, Dufay left to focus on his solo projects. Dufay is the father of actress Minka Kelly, who appeared in the film Charlie's Angles. Kelly followed in the footsteps of her grandfather (Dufay's father), Richard Ney. 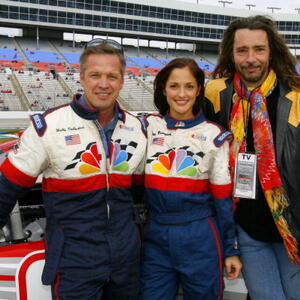