Reginald Arvizu Net Worth: Reginald Arvizu is an American musician who has a net worth of $20 million. Born in 1969 in Los Angeles County, California, Reginald Arvizu started playing in the band L.A.P.D. right out of high school. The group eventually changed its name to Korn after agreeing to a deal with singer Jonathan Davis.

Known by the nickname "Fieldy", Arvizu has been with the band from the beginning until he took a break in mid-2012 while his wife was pregnant. Arvizu plays a five-string Ibanez bass with Korn and is considered one of the group's best songwriters. He also handles all of the group's merchandising sales and designs. In addition to Korn, Arvizu has appeared in videos for Ice Cube, Bubba Sparxx, Lil Wayne, E-40, and Limp Bizkit. He dabbles in rap on the side with his project Fieldy's Dreams, which has, so far, released one album called "Rock'n Roll Gangster", with a second in the works. In 2009, he published his autobiography, "Got The Life: My Journey of Addiction, Faith, Recovery and Korn", which discusses his battle with drugs. He has been married three times with several children from his previous marriages. Arvizu is currently married to his third wife, Dena Beber, and has been since 2006. 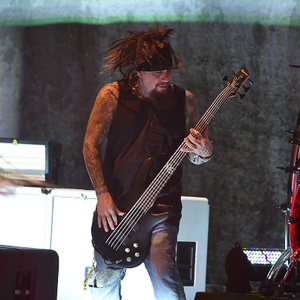