Ravi Shankar Net Worth: Ravi Shankar was an Indian musician who had a net worth of $5 million. Born in Varanasi, United Provinces, British Raj, in 1920, Pandit Ravi Shankar is one of the best-known sitar players and Hindustani classical music composers of his time. He grew up touring his home country and much of Europe with his brother's dance group before deciding he'd rather learn to play the sitar. He studied under famed musician Allauddin Khan for several years before breaking into composing. Shankar put together the music for Satyajit Ray's "Apu Trilogy" and by 1949, scored a gig as All India Radio New Dehli's music director. In the 1950s, he was invited to perform in the Soviet Union and New York City before touring different parts of the world. In the early '60s, he became the first Indian to compose music for foreign films. During the decade, he founded Mumbai's Kinnara School of Music and later opened a branch in Los Angeles. He performed at Woodstock and published his autobiography, "My Music, My Life", all during the latter half of the decade. Shankar taught at City College of New York and UCLA before landing the job of chair of the department of Indian music at the California Institute of the Arts. He won dozens of awards, including three Grammys and the Tagore Award. Shankar was nominated for one Oscar during his career. He married Annapurna Devi in 1941 and they had one son together before their separation. Shankar began dating dancer Kamala Shastri before having an affair with New York concert producer Sue Jones. As a result of the affair, Jones gave birth to jazz artist and Grammy winner Norah Jones in 1979. He later married Sunkaya Rajan in 1989. Shankar died on December 11, 2012, after a heart valve operation. 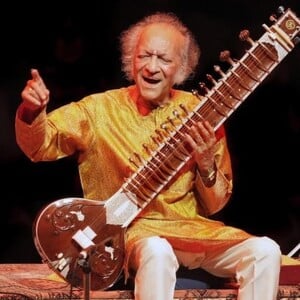