Randy Blythe Net Worth: Randy Blythe is an American vocalist and lyricist who has a net worth of $2 million. Randy Blythe was born February 21, 1971 in Richmond, Virginia. He is best known as the singer and lyricist for the groove metal band Lamb of God as well as for his side project Halo of Locusts.

As a teen he idolized such bands as the Sex Pistols, Megadeth, Bad Brains, Slayer and Motorhead. He is, unfortunately, just as well known for being indicted in the Czech Republic on manslaughter charges related to the 2010 death of Daniel Nosek, a 19-year-old fan. The Czech courts found that Blythe pushed the fan off the stage and was "morally responsible" for the killing, but contended that liability for Nosek's death also lay with promoters and security members and ultimately acquitted Blythe of the criminal charges. On January 5, 2012, Blythe announced that he would be running for President of the United States via a blog entry entitled "I want to be The Big Cheese". His official campaign slogan was "F*** the dumb sh**. Let's get real here. Blythe did not appear on any United States ballot that election year. Blythe appeared as Luke in the movie The Graves (2009), written and directed by Brian Pulido and also several DVDs of some of his musical peers such as Killswitch Engage's (Set This) World Ablaze and Machine Head's Elegies. Blythe was also featured in Metal: A Headbanger's Journey, Working Class Rock Star and Melissa Cross's The Zen of Screaming. In the summer of 2017, he joined the loose-knit fraternity of artists to cover songs by Johnny Cash, collaborating with heavy metal band DevilDriver for a rendition of the song "Ghost Riders in the Sky" (which, interestingly was also a cover version when Cash sang it), for an upcoming album of country-western covers by the band. 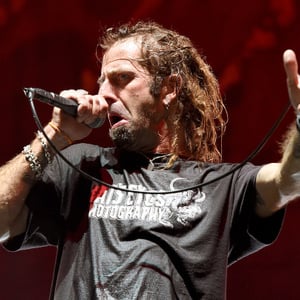