Rachel Bolan net worth: Rachel Bolan is an American musician, songwriter, and producer who has a net worth of $8 million. Rachel Bolan was born in Point Pleasant, New Jersey in February 1966. He is the bass guitarist and main songwriter of the heavy metal band Skid Row. The band formed in 1986 and released their self-titled debut studio album in 1989 which reached #1 in New Zealand and #6 in the United States. Their album Slave to the Grind was released in 1991 and reached #1 in the US. Skid Row has also released the albums Subhuman Race in 1995, Thickskin in 2003, and Revolutions per Minute in 2006. Their single "18 and Life" reached #4 in the US and #6 in Canada and their single "I Remember You" reached #6 in the US and #2 in New Zealand. Rachel Bolan has played with other bands including Prunella Scales, Stone Sour, The Quzimotors, and more. 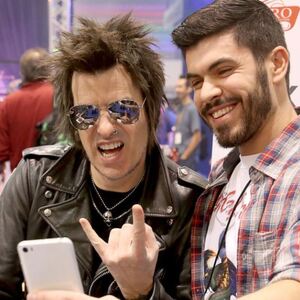