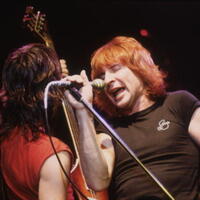 Phil Mogg net worth: Phil Mogg is an English singer and musician who has a net worth of $6 million. Phil Mogg was born in Wood Green, North London, England in April 1948. He is the lead singer of the rock band UFO. Mogg plays guitar, piano, percussion, and harmonica. The band UFO was formed in 1969 and released their debut studio album UFO 1 in 1970 and released their 22nd studio album The Salentino Cuts in 2017. Their album Mechanix was released in 1982 and reached #8 in the UK and their album Lights Out was released in 1977 and reached #23 in the US. Phil Mogg released a pair of albums under the name Mogg/Way and an album with his side project $ign of 4. He is the only UFO member to appear on every album. Mogg was a junior boxing champion and his nephew is the bassist for the band The Quireboys.