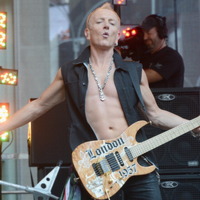 Phil Collen net worth: Phil Collen is an English musician and songwriter who has a net worth of $20 million dollars. Phil Collen was born in Hackney, London, England, and began playing guitar when he was in his early teens. He subsequently dropped out of school to focus on a career in music. He played for a number of bands early in his career, and began to make a name for himself performing with the group, Girl. In the early 80s, he was invited to join Def Leppard, and his excellent working relationship with fellow Def Leppard guitarist, Steve Clark, gave Def Leppard its distinctive dual guitar sound. The pair became known as the "Terror Twins". He has released 10 albums with Def Leppard, as well as two albums with his side project, Man Raze. He has also guest-performed on a number of albums and produced albums for BB Steal and Sheer Greed.