Peter Green Net Worth: Peter Green was a British musician who had a net worth of $10 million dollars at the time of his death. That net worth is mostly the value of his song catalogue and future royalties. He was best known as the co-founder, vocalist, and guitarist of the band Fleetwood Mac. Peter Green died on July 25, 2020 at the age of 73. He wrote some of the band's most-popular early songs, including "Albatross", "Woman and Oh Well" and "Black Magic Woman" – which would later be made internationally famous by Carlos Santana. He formed the band in 1968 but left in 1971 after suffering from mental health issues.

Peter Allen Greenbaum was born in Bethnal Green, London in October 1946. He received a cheap guitar as a birthday present when he was 10. The gift set Peter on a new path in life. He was barely 20 years old when he was invited to replace Eric Clapton in a band called John Mayall & the Bluesbreakers. He was initially invited as a temporary replacement while Eric was on vacation in Greece. Clapton ultimately quit for good and Peter was the official replacement.

One of the other members of the bluesbreakers was an old friend named Mick Fleetwood. John Mayall eventually hired a bass player by the name of John McVie.

"Well, you know I thought maybe I'd move on at some point and I wanted [you] and John to have a band."

A testament to his generosity and selflessness.

The band signed with the Blue Horizon label. Their self-titled debut album "Fleetwood Mac" was released in 1968. The album, which was alternatively titled "Peter Green's Fleetwood Mac", was a huge success and reached #4 on the charts. Their second studio album "Mr. Wonderful" was also released in 1968 and the band had hits with "Black Magic Woman" and "Albatross". Green also wrote the hits "Oh Well", "Man of the World", and "The Green Manalishi – his last single for the group.

While touring in California with the Grateful Dead, Peter Green started taking large amounts of LSD . His bandmates quickly became concerned about his health. He was worried about having too much money and tried to convince everyone in the band to donate all of their money and future earnings to charity.

He left Fleetwood Mac in 1970 with a brief reunion in 1971. After his departure, the band brought on the lineup most people know today, with new members Lindsey Buckingham, Christine McVie and Stevie Nicks. This incarnation would go one of the most successful musical groups in history.

After leaving the band, Peter spiraled somewhat and by 1977 ended up in a mental hospital where was diagnosed with schizophrenia and underwent electroconvulsive therapy.

He went on to contribute to tracks for Fleetwood Mac and Mick Fleetwood. In the late 1990s he formed the Peter Green Splinter Group which released nine albums. He released seven solo albums and many more with other artists.

In 1998 Fleetwood Mac was inducted into the Rock and Roll Hall of Fame with all of the past and present members of the band. Peter Green's songs have been recorded by Santana, Tom Petty, Aerosmith, and Judas Priest. Rolling Stone listed Green as the #38 Greatest Guitarist of All Time. 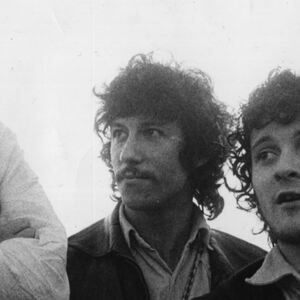