Peter Gabriel Net Worth: Peter Gabriel is a British singer, songwriter, and activist with a net worth of $95 million dollars. Gabriel first rose to fame as the lead vocalist for the band, Genesis. He is one of the founding members of Genesis, which he started in 1967 with school mates Tony Banks, Anthony Phillips, Mike Rutherford, and drummer Chris Stewart. Gabriel quickly became well-known for his flamboyant performances involving bizarre and sometimes complicated costumes.

Gabriel left Genesis in 1975, he was replaced by Phil Collins, and embarked on a highly successful solo recording career. His greatest success came with his 1986 album "So". The album hit number one in the UK and number two in the US and spawned three Top 40 hits in the U.S. "Sledgehammer", "Big Time", and "In Your Eyes". "Sledgehammer" hit number one in the U.S., ironically knocking Genesis's "Invisible Touch" out of the top spot. Gabriel's music video for "Sledgehammer" won nine MTV Video Music Awards in 1987.

Early Life: Peter Brian Gabriel was born in Surrey, England on February 13th, 1950. His father was an electrical engineer, and his mother came from a family of musicians. His family has well-established English heritage with Gabriel's great-great-great uncle, Sir Thomas Gabriel, being a Baronet and the Lord Mayor of London in the late 1800s. As a schoolchild, his teachers noted his talent for singing, and Gabriel learned to play the piano and the drums. He states that his earliest musical influences were hymns and that they came the closest to soul music prior to him discovering the genre. At age 12, he wrote his first song "Sammy the Slug." A year later in 1963, he joined his first band, and then formed his own with friends from school. His second band, Garden Wall, included his friends Tony Banks and Chris Stewart who would later go on to form Genesis.

Early Career: After Garden Wall disbanded in 1967, the members were invited to work on some demo tapes with a couple classmates, Anthony Phillips and Mike Rutherford. The group sent the tape to a former classmate, Jonathan King, who had become a musician. King was enthused over the tape and particularly of Gabriel's vocals, and he signed the group. Although King suggested Gabriel's Angels as a name, the group disliked it and settled on his other suggestion Genesis. At the suggestion of King, the group's first album, "From Genesis to Revelation," was more pop than rock and unfortunately was a commercial failure. Due to their poor commercial reception, the group decided not to pursue working on the band as a fulltime job, and Gabriel got work playing the flute on Cat Stevens' third album. However, they continued to make music and received more recognition in 1970 with their second album "Trespass." It was met with mixed reviews among critics but was relatively popular in Europe. The band recruited guitarist Steve Hackett and Phil Collins as drummer for their third album, "Nursery Cryme," which received more positive critical reviews.

Collins and Hackett remained with the band for their subsequent album "Foxtrot." It was their most popular album yet and charted at no. 12 in the UK. Critics praised the album's composition and felt signaled the band was coming into its own. While touring for the album, Gabriel's development and talent as a performer became clearly evident. He would recite stories between songs and would wear extravagant costumes and makeup that were suited to the song being played. During a 1973 Dublin show, Gabriel disappeared after a song and came back for the next one in his wife's red dress and a fox's head, which mimicked the album's cover. He elected not to tell his bandmates out of fear they'd vote against it, but the stunt proved to be a smart marketing move. They received positive media coverage for it and were able to increase their ticket prices. Gabriel's last album with Genesis would be "The Lamb Lies Down on Broadway," released in 1974. There were tensions among the bandmembers with Gabriel increasingly dominating their creative direction. The album was nevertheless a commercial winner and was certified gold in the US and UK. Although it was met with a mixed reaction among critic of the time, it has gone on to gain critical acclaim over the years. It was a concept album following a narrative by Gabriel. The album's songs follow the story of a young Puerto Rican boy's journey to self-discovery as he experiences New York City. He left the band after their 1975 tour and wrote a piece to the press explaining that he wanted to spend more time with his family and had become disillusioned with the business side of music.

Solo Career: After leaving Genesis, Gabriel went on to have a successful solo career. His first four albums were self-titled. The first couple, produced between 1975 to 1977, were commercially successful in the US and UK. After a dispute with Atlantic Records, Gabriel left the label and signed with Mercury Records for his 3rd self-titled album. His 1980 album was similarly successful, but it marked an artistic departure from his rock roots. The songs were themed around South African apartheid, and the sound was heavily influenced by African music. On the tour for this album, he began crowd surfing, which would become a staple of his performances. He saw true solo success after his fifth album "So" released in 1986. With "So," Gabriel saw 4 hit singles in the UK and one in the US. Gabriel was nominated for four Grammy's, two wins at the Brit Awards, and nine MTV Video Music Awards. It has gone on to receive significant acclaim from critics but did so at the time as well. His next album "Us" was released in 1992 was a hit. It was certified platinum in the US and UK and was equally and more successful elsewhere. He won three Grammy's for the album all in the music video categories. Gabriel has also worked on a number of film soundtracks and won a Grammy for his work on the soundtrack for the film WALL-E.

Personal Life and Accolades: Gabriel is involved in humanitarian rights and has advocated for various causes throughout his career. He married Jill Moore in 1971, and the couple had two daughters. They divorced in 1987, and he went on to marry Meabh Flynn in 2002. The pair has two sons together and live in the UK where Gabriel runs a record label called Real World Studios. Gabriel was presented with the Man of Peace award in 2006 by the Seventh World Summit of Nobel Peace Laureates, and that same year, he was awarded the Q magazine Lifetime Achievement Award. 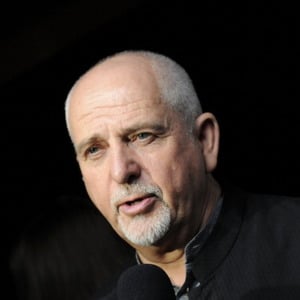