Perry Farrell Net Worth: Perry Farrell is an American musician who has a net worth of $50 million. Farrell is probably most famous for his role as the lead singer of the band Jane's Addiction. He also created the touring festival Lollapalooza and has been closely involved with the creation or production of many other festivals. Outside of his work with Jane's Addiction, Farrell has worked with other bands as well.

Early Life: Peretz Bernstein was born on March 29th of 1959 in Queens, New York City. Raised in a Jewish family, Bernstein grew up in places like Long Island and Miami Beach. His mother committed suicide when he was just three years old, and he was brought up by his father, a jeweler. While growing up, Perry listened to bands like The Beatles, The Rolling Stones, Led Zeppelin, Iggy Pop, and David Bowie.

After graduating from high school, Bernstein relocated to Los Angeles and spent most of his time surfing. He lived in his car and earned money by doing odd jobs.

Career: Peretz's music career began in 1981 when he joined the band Psi Com. The group broke up in 1985, and Bernstein then connected with Eric Avery. The pair started jamming together and eventually co-founded the band Jane's Addiction in the mid-80s. The band was named after a woman they knew who had a heroin addiction. At this point, Peretz Bernstein adopted the stage name Perry Farrell for the first time, which was a play on the word "peripheral."

Jane's Addiction quickly gained a cult following in Los Angeles and released three albums over the next few years: "Jane's Addiction," "Nothing's Shocking," and "Ritual de lo Habitual." These albums achieved commercial success due to the growing alternative rock movement. In 1991, Farrell's heroin addiction became a source of conflict within the band, and Jane's Addiction split up soon afterward.

In 1997, Jane's Addiction got back together for a brief tour. In 2001, they reunited once again, joining the lineup for the first-ever Coachella Music Festival and saving it from failure. In 2003 they toured together once again, and that year they also released another album called "Strays." Unfortunately, internal divisions got the better of them once again, and Jane's Addiction split up for the second time in 2004. However, in 2008, the group got back together, continuing to tour long after 2011.

In 1999, Perry embarked on a solo career, releasing his debut album "Song Yet to Be Sung." He has since released a number of songs online, including "Go All the Way (Into the Twilight)," which featured on the soundtrack of the film "Twilight." In 2018, he signed with BMG Records and began work on another solo album called "Kind Heaven."

After Jane's Addiction's second breakup in 2004, Perry Farrell created a new band called Satellite Party. The group is extremely theatrical, and their first album was based on the concept of musicians trying to save the world. They performed at Lollapalooza in 2005 before releasing their debut album "Ultra Payloaded" in 2007. A number of well-known artists collaborated on the album, including Fergie from the Black Eyed Peas and Flea from the Red Hot Chili Peppers. In 2007, Satellite Party also performed at Coachella.

Philanthropy: Perry Farrell has collaborated with Tom Morello of Rage Against the Machine on multiple occasions for philanthropic projects. Together, they established the Axis of Justice Tour to raise money for homeless individuals in Los Angeles. They also personally helped remove debris in the aftermath of Hurricane Katrina to help musicians who were struggling to get by. Another project created by Morello and Farrell was Road Recovery, an initiative aimed at helping people overcome addiction.

Perry Farell is a self-avowed environmentalist. He once met with UK Prime Minister Tony Blair to discuss global warming, and in 2007 he partnered with Global Cool, a climate change charity to promote an environmentally sustainable lifestyle.

Perry is also a staunch supporter of Israel, and once tried to bring the Lollapalooza Festival to the nation. However, almost no artists wanted to perform in Israel and the plans fell through. He also performed at the "Stand With Israel" gathering at Building 7 of the World Trade Center.

Kind Heaven: In 2018, Perry Farrell launched Kind Heaven, an entertainment attraction based in Las Vegas. He announced that the project would involve technology and storytelling and that it was set to launch in 2019.

Relationships: In 1998, Perry had a child with his then-girlfriend Christine Cagle. In 2002, he married Etty Lau, a professional dancer who had performed in various shows for Jane's Addiction prior to her relationship with Perry. Over the course of their relationship, they have had two children together.

Real Estate: In 2010, Perry Farrell listed his property in the Venice neighborhood of Los Angeles for $1.6 million. When the house received little interest from buyers, Farrell re-listed it for a discounted price of $1.495 million. It eventually sold for $1.425 million later that year. 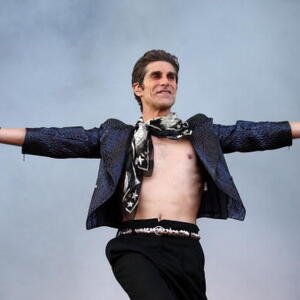