Paulina Rubio Net Worth: Paulina Rubio is a Mexican singer, actress and television personality who has a net worth of $35 million. Paulina Rubio was born June 17, 1971 in Mexico City, Mexico. She is known in Mexico and Ibero-America as an original member of the pop group Timbiriche (1981-91). Rubio has been nominated for several Latin Grammy Awards and has sold over 20 million records worldwide as a solo artist and is considered one of the most influential Latin celebrities in the world. In 2000, her album Paulina cemented her status as an international star. In 2013, Rubio served as a judge on the American television show The X Factor. Rubio is also known for her sexy music videos, which include the popular Boys Will Be Boys and Algo Tienes. In addition to her work in music and TV, Rubio is a model, actress and businesswoman. She collaborated with M.A.C. Cosmetics on a lipstick named "Rubia". Rubio, who currently resides in Miami, Florida, also owns a Miami restaurant called L'Entrecôte de Paris. Her image is maintained in terms of 'style' by the clothing of designers Roberto Cavalli (who is also a longtime friend of Rubio's), Ina Soltani, Prada, Gucci, Dolce & Gabbana, Alexander McQueen, and others. Rubio married Spanish businessman Nicolás Vallejo-Nájera in 2007 and three years later the couple had a son, Andrea Nicolás. Shortly thereafter, the relationship unraveled, which resulted in a highly publicized and bitter divorce. Rubio's public feud with former Timbiriche band mate Thalia has also received heavy media coverage. Rubio made headlines again in 2011 when she was arrested for refusing to comply with Miami police after a car accident. In yet another controversial event, in 2013, Rubio reached a settlement with an assistant who claimed Rubio physically assaulted him. 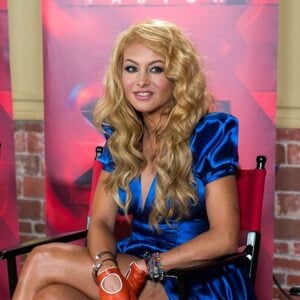