Paul Simonon net worth: Paul Simonon is an English musician and artist who has a net worth of $15 million. Paul Simonon was born in Thornton Heath, Croydon, England in December 1955. He is best known for being the bassist for the band The Clash. Simonon has also been a part of the supergroup The Good, the Bad & the Queen.

The Clash formed in 1976 and released their self-titled debut studio album in 1977 which reached #12 in the UK. The band released the album Give 'Em Enough Rope in 1978 and it reached #2 in the UK. The Clash released the successful albums London Calling in 1979 and Sandinista! in 1980. Their album Combat Rock was released in 1982 and reached #2 in the UK and #7 in the US and they released the album Cut the Crap in 1985. The Clash had many successful singles include "White Riot", "London Calling", "Rock the Casbah", and "Should I Stay or Should I Go". Paul Simonon played on the Good, the Bad & the Queen's self-titled album in 2007 and the album Merrie Land. He also played on the self-titled album by Havana 3 am in 1991 and on Gorillaz albums Plastic Beach and The Fall. 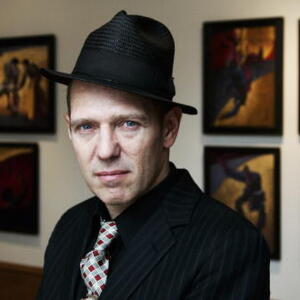