How much is Paul Simon Worth?

Catalog Sale: On April 1, 2021 it was revealed that Paul Simon had sold his entire music catalog to Sony Music Publishing. The exact dollar amount of the deal was not disclosed but based on comparable sales around the same time period, it was likely in the $100-200 million range. The sale included 100% of Simon's rights as both a songwriter and publisher so all future royalty income goes to Sony. Approximately 400 songs were included in the sale, including hits released when he was a member of Simon & Garfunkel. Notable songs include "The Boxer", "50 Ways to Leave Your Lover", "Graceland", "Bridge Over Troubled Water" and "Mrs. Robinson".

Early Life: Born on October 13, 1941 in Newark, New Jersey Simon was surrounded by music from a young age. His mother was an elementary school teacher while his father was a double-bass player and dance bandleader, in addition to being a college professor. At the age of four, Simon and family moved to the borough of Queens in New York City.

While attending Fairfax High School Paul met his future band mate Art Garfunkel when the two were performing in a sixth-grade production of "Alice in Wonderland".  They hit it off and soon began performing at school dances. They were influenced by such people as The Everly Brothers and Woody Guthrie.

They enjoyed some initial success when signed with the Big Records label under the name Tom & Jerry. The two boys would occasionally reunited to perform together while in college.

Simon attended Queens College, where he majored in English Literature and joined the Alpha Epsilon Pi fraternity. He graduated with this degree in 1963 and decided to attend law school, though he changed his mind after only one semester at Brooklyn Law School.

Simon and Garfunkel: While Simon had been performing and writing solo material while in college, he and Art had continued performing together and signed a deal with Columbia Records in 1964, when they also started going by Simon & Garfunkel rather than Tom & Jerry. Their first LP, Wednesday Morning 3 A.M., was not initially successful upon its release in October of 1964. However, one of the tracks from the album, "The Sound of Silence," started earning a great deal of radio play and when Simon & Garfunkel's producer rereleased the song with some overdubbing, it went on to become No. 1 on the U.S. pop charts.

Simon & Garfunkel subsequently released four more albums together: Sounds of Silence; Parsley, Sage, Rosemary, and Thyme; Bookends; and Bridge over Troubled Water. The duo enjoyed substantial success together and continued to reunite even after Simon decided to pursue solo projects. Simon & Garfunkel were inducted into the Rock and Roll Hall of Fame in 1990and they received a Grammy Lifetime Achievement Award in 2003. They have toured both the United States and the world during reunion tours, drawing large crowds .

Solo Career: Following the formal split of Simon & Garfunkel in 1970, Simon focused on his solo projects. He released a self-titled album in 1972 after having released the hit single "Mother and Child Reunion." The album was very successful, reaching No. 4 on the U.S. charts and No. 1 in the United Kingdom. In the years that followed, he continued to steadily produce albums and was frequently a regular on the top music charts. In 1975, he released Still Crazy After All These Years, which earned him the Grammy Award for Album of the Year as well as Best Male Pop Vocal.

In the latter half of the 1970s and into the 1980s, Simon began to release music more slowly and it was often met with less enthusiastic popular response. However, one of his albums, Hearts and Bones, released in 1983 to disappointing sales went on to be viewed as one of his best works to date.

This slowdown did not last long, as Simon was thrust back into the spotlight with the release of Graceland, which became his most successful solo album. The sound of the album was highly inspired by Simon's experience working with South African musicians, including Ladysmith Black Mambazo. Graceland won the 1987 Grammy Award for Album on the Year as well as the Grammy Award for Record of the Year in 1988. In 1990, he followed up by releasing The Rhythm of the Saints, primarily recorded in Rio de Janeiro, which was also very favorably reviewed.

Following the success of Graceland and The Rhythm of the Saints, Simon organized a concert in Central Park with African and South American Bands. The concert was wildly successful, drawing a crowd of over 750,000, making it one of the largest concert audiences in history.

Simon's popularity dropped over the next few years but he has continued to remain successful, frequently releasing new music and touring extensively around the world. He has appeared on Saturday Night Live 14 times, won 12 Grammy Awards, two Brit Awards, has been a recipient of the Kennedy Center Honors, recognized as a BMI Icon, and was selected by Time Magazine as one of the "100 People Who Shaped the World."

Personal Life: Simon has been married three times. He married his first wife, Peggy Harper in 1969 and had a son with her, Harper Simon, in 1972. They then divorced in 1975. He then met actress Carrie Fisher of Star Wars and married her in 1982. The couple divorced in 1984 but the two remained in a relationship for several years beyond their divorce. In 1992, Simon married singer Edie Brickell. The two have three children together and have remained married.

Simon also developed a close relationship with Lorne Michaels, Saturday Night Live creator, and the two became friends in the 1970s while Simon lived in New York. Simon has also devoted himself to youth music education and is involved with or contributes to a number of music-related organizations and festivals.

Paul Simon Real Estate: In 2012, spent around $16 million to acquire a 32-acre property in New Canaan, Connecticut. He listed the home for sale for $14 million in April 2019. The property features an 8,500 main house and sprawling grounds. 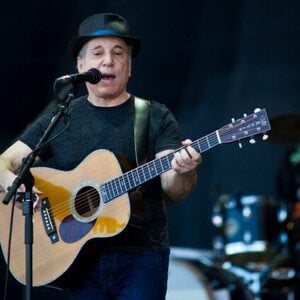