Paul Rodgers Net Worth: Paul Rodgers is an English-Canadian singer-songwriter who has a net worth of $14 million dollars. Born in Middlesbrough, England on December 17, 1949, Paul Rodgers is best known for being the vocalist for the bands Free and Bad Company. His most recent success comes from recording and performing with Queen.

He is fluent in vocals, guitar, keyboards, piano, drums, bass, harmonica, synthesizer, flute, harp, and other percussion. He has been active in the music industry since 1968 and has been affiliated with records labels such as Atlantic, Victor Entertainment, SPV GmbH, and Velvel. He was listed at number 55 on the list of "100 Greatest Singers of All Time," according to Rolling Stone. Rodgers' first band was called The Roadrunners, with whom he played bass and later switched to vocals. He joined Free in 1968 and discovered international radio success in 1970 with their single "All Right Now. Following the dissipation of Free, Rodgers formed Bad Company with Mick Ralphs, Simon Kirke, and Boz Burrell. They toured from 1973 to 1982 and released several successful singles including "Can't Get Enough," the self-titled "Bad Company," "Shooting Star," and more. Rodgers made his solo debut in 1983 with his album Cut Loose. He was featured on the album as a multi-instrumentalist. He eventually created The Firm with Jimmy Page and tracked two albums and completed two tours before disbanding and the formation of The Law in 1991 with former members of The Who and Faces. Rodgers collaborated with Steve Vai on the project in effort to cite his admiration of Jimi Hendrix. In 2001 Rodgers joined Bad Company once again for a reunion tour. He was approached by Queen in 2004 and was asked to tour with the band between 2005 and 2006. Following the tour with Queen, he focused on his solo career and in 2007 performed alongside the Trans-Siberian Orchestra. He is currently married to Cynthia Kereluk with two children by his former wife by the names of Steve and Jasmine. 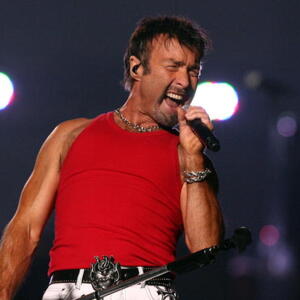