Paul Gilbert net worth: Paul Gilbert is an American heavy metal guitarist who has a net worth of $4 million. Paul Gilbert was born in Carbondale, Illinois in November 1966. He co-founded the band Mr. Big and was also a member of the band Racer X. Gilbert has been named Guitar One magazine's fourth Greatest Guitar Shredder of All Time and was part of Guitar World's 50 Fastest Guitarists of All Time.

Gilbert started playing music at five years old and was touring local clubs at 15. He studied at the Guitar Institute of Technology and was later hired as an instructor. Racer X was formed in Los Angeles, California in 1985. Gilbert left the band in 1988 but it was reformed in 1996. Racer X released five studio albums. Mr. Big formed in Los Angeles in 1988. The band's hit single "To Be with You" reached #1 in 15 countries and they have released eight studio albums. Gilbert has also released 14 solo albums since 1998 and has made several guest appearances. 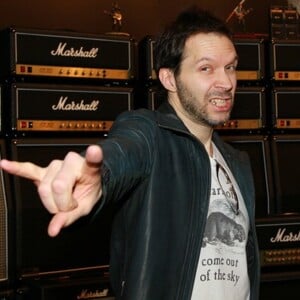