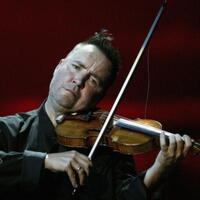 Nigel Kennedy net worth: Nigel Kennedy is a British violinist and violist who has a net worth of $5 million. Nigel Kennedy was born in Brighton, England in December 1956. Kennedy started out in the classic music genre but has expanded to jazz and klezmer among others. Nigel's grandfather Lauri Kennedy was a principal cellist for the BBC Symphony Orchestra. His father was cellist John Kennedy. Nigel was a prodigy and was a pupil at Yehudi Menuhin School of Music at seven years old. He also studied at the Julliard School in New York under Dorothy DeLay. Kennedy debuted at New York's Carnegie Hall at 16. His album recording of Vivaldi's The Four Seasons with the English Chamber Orchestra sold more than two million copies and stayed on top of the UK classical music charts for more than a year. He was awarded for Outstanding Contribution to British Music at the BRIT Awards in 1997 and won Male Artist of the Year in 2001. He is also active in politics and is a socialist.