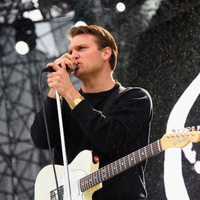 Nathan Willett net worth: Nathan Willett is an American musician and singer who has a net worth of $7 million dollars. Nathan Willett is the lead singer and resident poet for the Long Beach, California indie rock band Cold War Kids (CWK). The band hit the indie music scene in 2005. Willett started guitar lessons in the seventh grade, though he didn't know what type of music he wanted to play at the time, he says he categorizes Cold War Kids' music as soul-punk with an angular edge. He cites some of his favorite bands as being The Smiths (A Light That Never Goes Out being one of his favorite Smiths' song), and expressed his fondness for the book of the same title (based on the enduring saga of The Smiths—written by music journalist Tony Fletcher), Velvet Underground, U2, Bob Dylan and Frank Ocean. Willett is an avid reader and, even though the band's schedule is demanding, he says he uses a books, movies and other arts to find little ways to escape when the band is on tour. He grew up in a conservative family in Southern California. His father was deeply religious and his mother was a Christian marriage and family counselor. He found himself searching for answers on his own, away from his family. Cold War Kids' third album, Mine Is Yours, came straight from the pages of Willett's own life and his lyrics covered topics familiar to a counselor's couch—fractured relationships, self-doubt, broken homes. In 2017, the Cold War Kids released their sixth studio album, entitled L.A. Divine, the band's first following the departure of former lead guitarist Dann Gallucci. Before that, the band also recorded "Locker Room Talk," a song protesting Donald Trump's presidential candidacy for the 30 Days, 50 Songs Projec, with new lead guitarist David Quon.