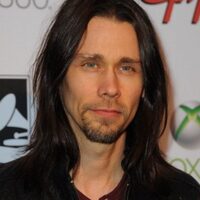 Myles Kennedy net worth: Myles Kennedy is an American musician and singer-songwriter who has a net worth of $3 million dollars. Born in Boston, Massachusetts, Myles Kennedy grew up in Idaho, and Spokane, Washington. He began playing trumpet while in elementary school, and then switched to guitar when he was in high school. Heavily influence by jazz, funk, and soul musical styles, he chose to enroll in a Jazz Studies program at a local college after high school. He began playing with a jazz ensemble called Cosmic Dust Fusion Band. The group was critically acclaimed, and released one album in 1991. He then moved on to the band, Citizen Swing. The group's sound combined elements of jazz, rock, and funk, and while a critical darling, never quite caught on with fans. In the late 90s, he formed the group, Mayfield Four. Again, the band became an instant critical favorite, but never quite found an audience. In recent years, however, their two albums have become considerably more popular. Since 2003, he has built a steady following for his work with the band Alter Bridge, his solo work, and his performances in collaboration with Slash.