Mitch Mitchell Net Worth: Mitch Mitchell was an English drummer who had a net worth of $5 million. Born in 1947 in Greenwich, London, England, as John Ronald Mitchell, Mitch Mitchell got his first state of show business as a teenager, appearing in "Jennings and Derbyshire", a children's TV program. He continued acting during the early '60s, appearing in "Bottoms Up", and soon took an interest in music and, in particular, the drums. By 1962, he was touring with several bands, and, four years later, landed an audition with The Jimi Hendrix Experience. Mitchell earned the part, becoming one of the most influential contributors to the band. He was with the group until the middle of 1969, though he did perform again in 1970. Mitchell continued to work as a producer on several posthumous Hendrix recordings, including "Rainbow Bridge" and "The Cry of Love". After Hendrix died, Mitchell continued drumming, appearing with Hinkleys Heroes and several other groups. He worked with Led Zeppelin, Bruce Cameron, and Jack Bruce, among others. He was awarded a spot on a "Rolling Stone" list of the greatest drummers in history. Mitchell began drumming again for the 2008 Experience Hendrix Tour around the United States despite battling illness related to excessive alcohol consumption for several years. He died in Portland, Oregon, on November 12, 2008, just a few days following the end of the tour. 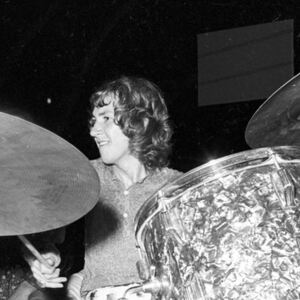