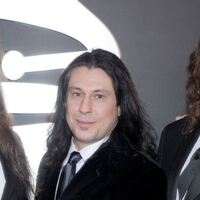 Mike Mangini net worth: Mike Mangini is an American drummer who has a net worth of $10 million. Mike Mangini was born in Newton, Massachusetts in April 1963. He has been the drummer of the progressive metal band Dream Theater since 2010. Mangini has played with the bands and artists Annihilator, James LaBrie, Extreme, and Steve Vai. He served as a faculty member at the Berklee College of Music and set five World's Fastest Drummer records from 2002 to 2005. Mangini appeared in an episode of the Discovery Channel TV series Time Warp where his drumming skills were capture don high speed cameras. He has played on the Dream Theater albums A Dramatic Turn of Events, Dream Theater, Live at Luna Park, Breaking the Fourth Wall, and The Astonishing. Mangini has also played on the albums Set the World on Fire, All for You, and Metal by Annihilator, Waiting for the Punchline by Extreme, Fire Garden, G3: Live in Concert, The Ultra Zone, and Alive in an Ultra World by Steve Vai, Keep It to Yourself, James LaBrie's MuliMuzzler 2, and Elements of Persuasion by MullMuzzler/James LaBrie, Exit Elvis by Tribe of Judah, and Take 3 and In Other Words by Mike Visconti.