What is Mike Love's net worth?

Mike Love is an American musician, singer, songwriter and activist who has a net worth of $80 million. Mike Love co-founded the Beach Boys with his cousins Brian Wilson, Carl, and Dennis Wilson and their friend Al Jardine. He served as one of the band's vocalists and lyricists, co-writing such hit records as "I Get Around," "California Girls," and "Good Vibrations." However, many of Love's contributions remained unrecognized until the 90s, when he sued Brian Wilson for writing credits on upwards of 30 songs. Today Mike is the only person legally allowed to tour using the band's name.

Mike Love was born in 1941 in Los Angeles, California, the first of six children of parents Emily and Edward. As a young adult, he went to Dorsey High School, graduating in 1959. Uncertain about the direction of his career, Love pumped gas and temporarily joined his father's sheet metal company. Meanwhile, he flexed his vocal skills at family get-togethers with his cousins, the Wilsons, with whom he often sang. When Love's father's company fell on hard times, the family moved to Inglewood, closer to where the Wilsons resided.

At the beginning of his music career, Love played saxophone in a garage band called the Pendletones. Along with Brian Wilson, neighbor Gary Usher, and local DJ Roger Christian, he established himself as a collaborator on the band's original compositions. Love drew inspiration from Chuck Berry and songwriting team Felice and Boudleaux Bryant, bringing doo-wop and R&B influences to the group's music. The Pendletones would eventually evolve into the band known as the Beach Boys.

Internal conflict in the Beach Boys was sparked in 1964, when Brian Wilson started to shift the band away from beach-themed surf music. According to many reports, Love resisted this new direction. Many people, including session musician Van Dyke Parks, subsequently blamed Love for the collapse of the Beach Boys' album "Smile." However, Love has disputed this accusation. In 1967, he returned to cowriting duties on the album "Wild Honey," the Beach Boys' first R&B project.

Later in 1967, Love became one of the numerous rock musicians who embraced the transcendental meditation technique of Maharishi Mahesh Yogi. Love and the Beach Boys attended many public appearances by the Maharishi, including ones in Paris, New York, and Cambridge, Massachusetts. After the latter appearance, the Maharishi invited Love to join the Beatles at a training seminar in Rishikesh, India. While there, Love planned a US concert tour with both the Beach Boys and the Maharishi as headliners. The tour launched in May of 1968, but ended after only five shows due to underwhelming audience numbers. Love still remained an avid supporter of the Maharishi, and even became a transcendental meditation initiator in 1972. 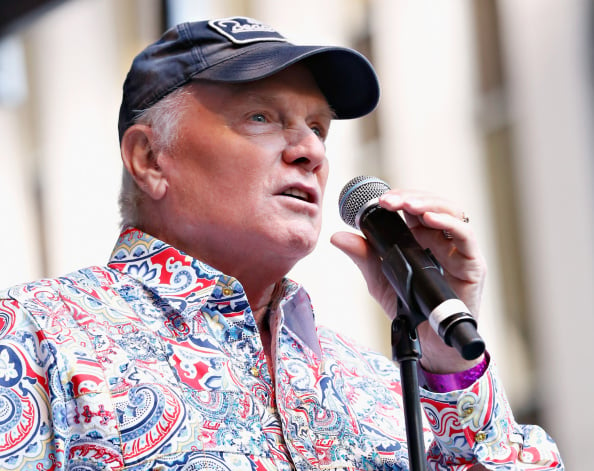 In the 70s and 80s, Love wrote the music and lyrics of many Beach Boys tracks, including "Big Sur" and "Sumahama." One of his greatest professional successes came in 1988, when he and the band had a US number-one hit with "Kokomo." The song went on to receive Grammy and Golden Globe Award nominations. Also in 1988, Love and his bandmates were inducted into the Rock and Roll Hall of Fame.

In the early 90s, along with Al Jardine and several members of the Wilson family, Love sued Brian Wilson for defamation regarding claims he made in his recent memoir. The case was settled out of court in what marked the first of multiple lawsuits Love filed against Brian. A couple of years later, Love won a legal proceeding giving him proper authorship credit for many of the songs he cowrote for the Beach Boys. He successfully argued that Murry Wilson avoided to credit him for his early lyrical contributions, consequently denying him royalties. Love still remains uncredited on over 40 of the band's songs he claims to have cowritten.

Following Carl Wilson's death in 1998, Love continued to tour with the Beach Boys, having leased exclusive rights to tour under the band's name. More legal disputes followed, as Love sued former bandmate Jardine for using the name during his tour. Although the courts ultimately ruled in Love's favor, Jardine went on to appeal the decision, seeking $4 million in damages. The case was finally settled out of court.

Love reunited with Jardine, Johnston, Brian Wilson, and David Marks in 2011 for both a new Beach Boys album and a 50th anniversary tour. Following the end of the tour, the band dropped Wilson, Jardine, and Marks. Later, in 2016, Love released his autobiography "Good Vibrations: My Life as a Beach Boy." The book was intended to address many of the alleged inaccuracies that had been spoken about Love over the years.

While he was still with the Beach Boys in 1978, Love co-founded the band Celebration, which had a top-30 hit in the US with the single "Almost Summer." A few years later, Love released his debut solo album, "Looking Back with Love." He didn't release a follow-up until 2017 with "Unleash the Love." The next year, Love put out a third solo album called "Reason for the Season," which featured both original and traditional Christmas music. A fourth solo album, "12 Sides of Summer," was released in 2019.

Since 1994, Love has been wed to Jacquelyne Piesen. He has two children with her and six others from his four previous marriages. Love lives in Incline Village, Nevada.

Love has been dedicated to activism and charity throughout his career. He has been involved in many projects advocating for such subjects as music education, environmentalism, and youth diabetes.