Mike Gordon Net Worth: Mike Gordon is an American musician, filmmaker and writer who has a net worth of $60 million dollars. Born in Sudbury Massachusetts on June 3, 1965, Mike Gordon is best known for playing bass in the rock band known as Phish. He has been active in the entertainment industry since 1982 and has been affiliated with Megaplum and ATO Records. He is also educated in banjo, piano and guitar. Along with playing music, Gordon has also written a book called Mike's Corner and produced approximately three films and one music video. He has nine releases under in his discography and formed Phish with Trey Anastasio, Jon Fishman and Jeff Holdsworth in 1983. He attended the Solomon Schechter Day School of Greater Boston, the Lincoln-Sudbury Regional High School, and the University of Vermont. Gordon acted as a powerhouse in the band, handling everything media-related until the band's success became overbearing on the self-management front. Gordon plays on Paul Languedoc custom guitars, one of which was a "dragon" bass. He has also played on a Modulus Quantum 5 bass. His amplification ranges from an SWR SM-900 to an Eden WT-800. He also plays banjo on tour with Phish and started learning in 1994. He played banjo on Bernie Worrell's 2007 release, Improvisczario. Gordon currently tours under his own name and has been doing so since 2008 with Scott Murawski, Todd Isler, Tom Cleary, and Craig Myers. In addition to playing on all of Phish's albums, he has released several solo albums and collaborations with Leo Kottke. 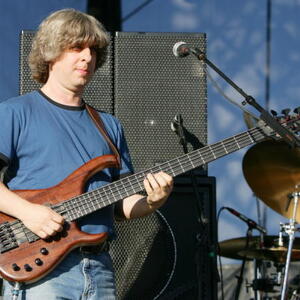