The band released their self-titled debut studio album in 1976. Their 13th and final album Hypnotic Eye was released in 2014 and finally reached #1 on the Billboard 200 chart. Campbell was featured on many popular singles including "Breakdown", "American Girl", "Don't Do Me Like That", "Refugee", "The Waiting", "You Got Lucky", "Don't Come Around Here No More", "Jammin' Me", "I Won't Back Down", "Runnin' Down a Dream", "Free Fallin", "Learning to Fly", "Into the Great Wide Open", "Mary Jane's Last Dance", "You Don't Know How It Feels", and more. Mike Campbell co-produced several albums for the Heartbreaks as well as three Tom Petty solo albums. He has also written songs for many popular artists. 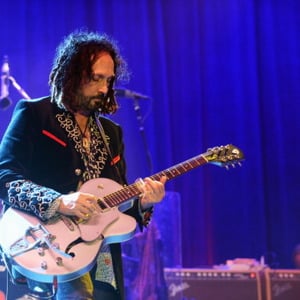