Mick Jones net worth: Mick Jones is a British guitarist, singer and songwriter who has a net worth of $10 million dollars. He is most famous for his work with the rock group The Clash. He became a member of the Rock and Roll Hall of Fame, along with his bandmates, in 2003.

He has been a founder and member of a number of other bands through the years, most notably Big Audio Dynamite and General Public. His first job was as guitarist in The Delinquents, followed by London SS. At that point he teamed with Tony James, Paul Simonon, Joe Strummer and Keith Levene to form The Clash. Three of their biggest songs were London Calling, Should I Stay or Should I Go, and Rock the Casbah. Starting as a guitarist, he developed his skills as a singer and songwriter. He has more recently performed with the groups Carbon/Silicon, Hard-Fi, The Justice Tonight Band, The Wallflowers and Gorillaz, which teams him back up with former Clash member Paul Simonon. Jones has worked as a producer over the years with Ellen Foley, Ian Hunter, Theatre of Hate and The Libertines. He wrote the score for the movie Dice Life-the Random Mind of Luke Rhinehart. Though best known as a guitarist, he is also at home on bass, keyboards, drums and the harmonica. He was born in the Wandsworth area of London in 1955. Jones and his wife Ellen have a daughter. 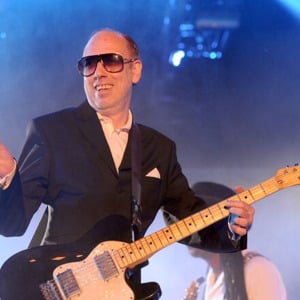