Michael Anthony was born in Chicago, Illinois in 1954 and grew up in the Los Angeles area. Anthony met guitarist Eddie Van Halen while both were students at Pasadena City College where he was pursuing an Associate's Degree in Music. He auditioned to be the bassist in the Van Halen brothers' band Mammoth, which in 1974 became known as Van Halen with Eddie Van Halen, Alex Van Halen, David Lee Roth and Anthony as members. Van Halen experienced phenomenal success and Anthony was a member of the band for 30 years, officially departing after the 2004 reunion tour. Anthony is a founding member and the bassist and backing vocalist for the band Chickenfoot with Sammy Hagar, Red Hot Chili Peppers drummer Chad Smith and guitarist Joe Satriani. The band released their first studio album in Europe on June 5, 2009. Anthony has been married to his wife Sue since 1981. They met while students at Arcadia High School and they have two daughters: Anthony and his family live in Newport Beach, California. 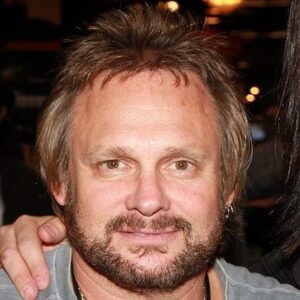