What is Maynard James Keenan's Net Worth?

Maynard James Keenan is an American musician, producer and winemaker. Maynard James Keenan has a net worth of $60 million. Maynard is best known for being the lead singer for rock bands Tool and A Perfect Circle. He has also released music as a band called Puscifer. Additionally, Keenan has done some acting on television and film, and owns a winery and cellars in Arizona.

Maynard James Keenan was born in 1964 in Ravenna, Ohio, the only child of Southern Baptists Judith and Michael. He is of Italian and Irish ancestry. Keenan's parents divorced a few years later, with his father moving to Scottville, Michigan and his mother remarrying. When Keenan was 11, his mother suffered a paralyzing hemorrhage; she later encouraged him to move to Scottville to live with his father. There, Keenan went to Mason County Central High School, where he was a member of the wrestling team. After graduating, he joined the US Army, initially as a forward observer before studying at West Point Prep School. After finishing his curriculum, he declined an appointment to West Point to instead pursue a career in music.

Following prep school, Keenan went to Kendall College of Art and Design to study art. Subsequently, he moved to Somerville, Massachusetts, where he did interior design for a pet store. He was then transferred to Los Angeles, where he took up set construction. As a musician, Keenan played bass guitar for the group TexA.N.S., and sang for the band Children of the Anachronistic Dynasty. Between 1990 and 1993, he performed and recorded with the comedy rock band Green Jellö.

Soon after moving to Los Angeles Maynard met Adam Jones. According to legend, Tom Morello, who would soon be member of Rage Against the Machine, heard Maynard screaming during a house party. Morello suggested he quit trying to be an artists and instead become a musician. With that in mind, it was Adam who then urged Maynard to form a band in 1990.

In 1991, Tool signed to Zoo Entertainment. The following year they released their first EP, "Opiate." Soon thereafter the group went on tour with Rage Against the Machine.

The band's debut album, "Undertow," was released in 1993; it was certified Gold after just eight months and was eventually certified multi-platinum. Tool attracted controversy with their music video, "Prison Sex", which was pulled from MTV because of its graphic nature.

Tool's second album, "Ænima," came out in 1996, and was certified Gold in ten weeks and also eventually went multi-platinum and reached #1 in New Zealand and #2 in the United States.. Moreover, it won the Grammy Award for Best Metal Performance. Following this, Keenan and his fellow band members became engaged in a protracted legal battle with their label, and decided to take a brief hiatus. 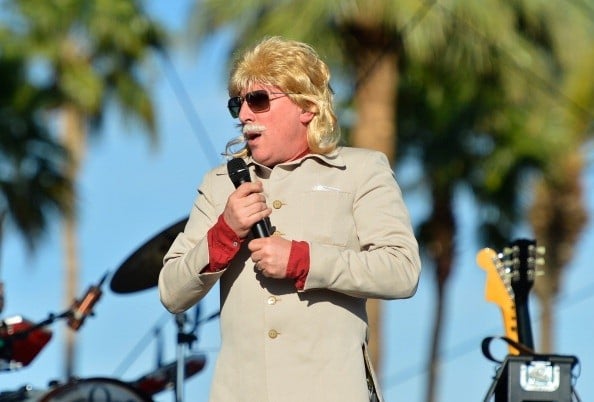 During Tool's brief hiatus, Keenan started working with Billy Howerdel; together, they formed the supergroup A Perfect Circle. The band began performing in 1999, and released its debut album, "Mer de Noms," in 2000. This was followed in 2003 by "Thirteenth Step." A 2004 album, "eMOTIVe," was mostly comprised of covers. A month after its release, it was certified Gold. Although the band took a break from recording albums, A Perfect Circle returned from a hiatus in 2010 for a 14-show tour across the western US.

In 2003, Keenan used the name Puscifer for a song he contributed to the "Underworld" film soundtrack. A sort of alter-ego, Puscifer went on to contribute a song to the film's sequel, "Underworld: Evolution." Later, in 2007, Keenan financed and released his first studio album under the name Puscifer, called "'V' is for Vagina." The album represented a drastic departure from Keenan's work with Tool and A Perfect Circle, as it was entirely created in hotel rooms, on a tour bus, and in various studios around the country. As a performer, Keenan debuted Puscifer at the Pearl Concert Theater in Paradise, Nevada, where he put on an abstract cabaret-style show. In 2011, Puscifer released another album, called "Conditions of My Parole." It was followed two years later by the EP "Donkey Punch the Night."

Winemaking and Other Projects

As a member of an Italian winemaking family, Keenan opened his own winery and cellars in an unincorporated area southwest of Sedona, Arizona, where he lives. He is the owner of Merkin Vineyards and Caduceus Cellars, and is a partner of Stronghold Vineyards, an 80-acre site also located in Arizona. Due to this experience, Keenan was featured in the 2010 documentary "Blood into Wine: The Arizona Stronghold," about the Northern Arizona wine industry.

On the acting front, Keenan was featured in several segments of the sketch comedy series "Mr. Show." In 2002, he played Satan in the comedy film "Bikini Bandits," and reprised the role for the film's 2004 sequel. Additionally, Keenan made cameo appearances in the 2009 action film "Crank: High Voltage" and on the IFC series "Comedy Bang! Bang! in 2015.

In the early 2010s, Keenan got married to Lei Li, the lab manager of his Caduceus Cellars. Together, they have a daughter. From a previous relationship, Keenan has a son named Devo.

Keenan has been involved in philanthropy throughout his career. In 1997, he performed at a benefit concert for the Rape, Abuse & Incest National Network. He is also among the performers of Axis of Justice, a nonprofit that fights for social justice by bringing together musicians, fans, and grassroots political groups.