Martin Gore Net Worth: Martin Gore is an English songwriter, singer, guitarist and keyboardist, best known as one of the founding members of the band Depeche Mode. Martin has a net worth of $100 million dollars. Martin Gore was born July 23, 1961 in Dagenham, Essex , England. He left school in 1977 and took a job as a bank cashier.

During evenings, weekends and any other spare time, he was involved with the local band Norman and the Worms. In 1980, Gore met Andy "Fletch" Fletcher at a club. Fletcher recruited Gore into his band Composition of Sound along with Vince Clarke. Soon the band drafted Dave Gahan to be the lead singer after hearing him sing "Heroes" by David Bowie. Gahan is credited with the name Depeche Mode after seeing the phrase as a title of a French fashion magazine. Depeche Mode went on to be one of the biggest new wave bands of the 1980s. Gore has written the majority of the band's songs. Gore's best-known songs include hits such as "Personal Jesus", "Enjoy the Silence", "I Feel You", "People Are People", "Everything Counts", "Shake the Disease", and "Never Let Me Down Again". In addition to composing music and writing lyrics for Depeche Mode songs, he has also been the lead vocalist on several, such as "Somebody", "A Question of Lust" and "Home", and has been a backing vocalist on many others. Gore is also producer, remixer and DJ. Between June 2017 and June 2018, Martin Gore and his fellow members of Depeche mode earned $55 million, collectively. 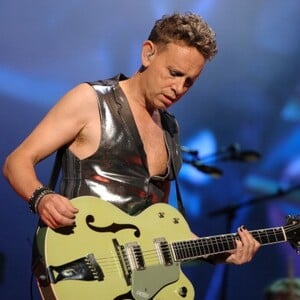