Marky Ramone net worth: Marky Ramone is a musician, songwriter and DJ who has a net worth of $12 million. Marky Ramone has earned his net worth as a drummer for the band known as the Ramones, as well as bands such as The Backstreet Boys, Dust, Wayne County, and others.

He's been active in the music industry since 1971 when he began playing drums when he joined the hard rock band, Dust. In the mid 70s Ramone joined with Wayne County and the Backstreet boys (not the boy band) and later on in the 70s he became a member of the Richard Hell and The Voidoids. From 1978 he played for the Ramones, replacing the original drummer, Tommy Ramone, and was given the name Marky Ramone. Due to a drinking problem, Ramone was asked to leave the Ramones, but returned one year later and continued with the band until they broke up in 1996. During the years that followed Marky Ramone performed with several bands and recording artists such as The Teenage Heads and the Misfits. He also formed his own bands, Marky Ramone and the Speedkings, Marky Ramone and the Marky Ramone and the Intruders, and Marky Ramone's Blitzkrieg. Ramone has also been the Executive Producer of the DVD entitled "Ramones Raw," and made an appearance on MTV where he was awarded the lifetime achievement award. He also starred in an episode of the "Simpsons," with the other members of The Ramones. He is also the DJ of his own show, The Punk Rock Blitzkrieg. Marky Ramone has released his own line of leather jackets, t-shirts and jeans with Tommy Hilfiger in 2009, as well as launching his own pasta sauce, known as "Marky Ramone's Brooklyn's Own Pasta Sauce. Ramone was born, Marc Steven Bell, in Brooklyn, New York in 1956 and was given the name Marky Ramone when he began playing for The Ramones. 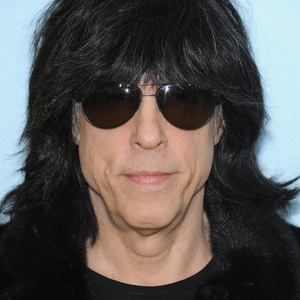